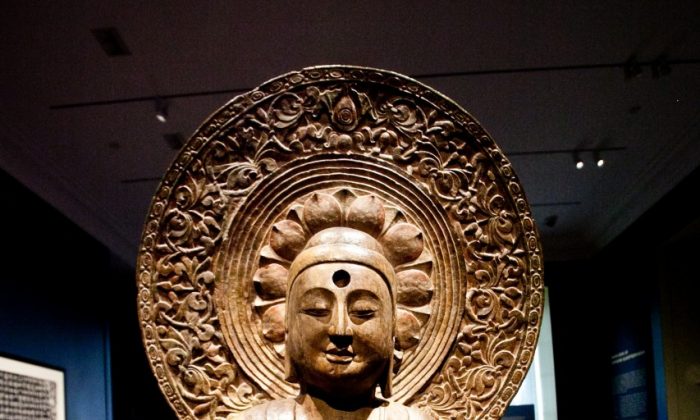 A seated Buddha with an elaborate halo embellished with floral and vegetal motifs is on exhibition at the Institute for the Study of the Ancient World (ISAW) at New York University from Sept. 11 through Jan. 6, 2013.
US

NEW YORK—Walking into dimly lit rooms filled with sixth-century Buddha statues, one enters an art exhibit at NYU. The serene ambience has a close likeness to that of the famed Chinese Xiangtangshan temple—mostly because the exhibit has digital reconstructions of the artwork’s original settings.

The exhibition, “Echoes of the Past: The Buddhist Cave Temples of Xiangtangshan,” will run from Sept. 11 through Jan. 6, 2013.

The Institute for the Study of the Ancient World (ISAW) at New York University (NYU) is the last stop for the exhibition, which was put together by the Smart Museum of Art, University of Chicago, and the Arthur M. Sackler Gallery, Smithsonian Institution, Washington, D.C.

“Echoes of the Past is a superb example of the enormous potential of digital technology in the public presentation of ancient sites and objects,” said Jennifer Chi, ISAW chief curator, in a statement.

The Buddhist cave temples of Xiangtangshan, which translates as “Mountain of Echoing Halls,” are intended to replicate a Buddha’s paradise. The temple was a cultural achievement of the Northern Qi dynasty (A.D. 550-577), whose rulers established Buddhism as the official religion.

The exhibit holds masterpieces such as a monumental Buddha head, nearly three feet high. Experts guess the head belongs to the figure of Prabhutaratna, Buddha of the Past, whose body is still in its original cave. It is estimated to have been carved some time between A.D. 550 and 559.

A smaller, intricately carved statue of a seated Buddha was removed intact, preserving its large and elaborate halo embellished with floral and vegetal motifs.

“While the sculptures from Xiangtangshan can—as indeed they have for many years—stand alone as powerfully impressive works of art, this exhibition is a rare and tremendously exciting opportunity to experience the carvings in their original context and to better understand the sacred meanings they were meant to convey,” Chi said.

The Xiangtangshan caves are located in a rural and coal-mining area in southern Hebei Province. A total of about 30 caves are divided among three sites, according to researchers at the University of Chicago’s Xiangtangshan Caves Project. The site was near the Northern Qi capital at Ye, and the early caves were created with the support of the royal family, officials, and Buddhist monks.

Many of the artifacts were damaged or stolen from 1909 onward, during periods of fierce political upheaval in China, including the fall of the last imperial dynasty in 1911 and the takeover by the communist party and its “Cultural Revolution.” Most of the remaining Buddha images have no hands or heads, and many of the large free-standing statues were forcibly cut out.

High human traffic at the sites has also taken its toll, and today a combination of acid rain, due to coal-fired power plants, and cement dust from nearby factories is taking a visible toll on the sites, the researchers said.