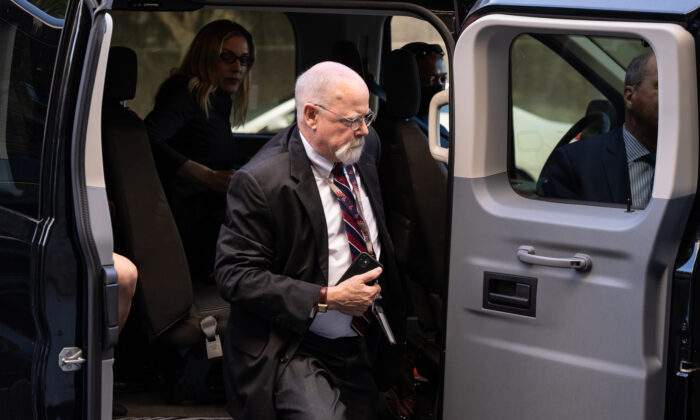 Special counsel John Durham arrives at federal court in Washington on May 18, 2022. (Teng Chen for The Epoch Times)
US News

WASHINGTON—The technology executive who was one of Michael Sussmann’s clients when Sussmann took sketchy claims to the U.S. government was terminated as a confidential informant by the FBI in 2021, prosecutors revealed during Sussmann’s trial on May 17.

Rodney Joffe, the executive, exploited his access to non-public data at multiple technology companies to conduct opposition research into then-presidential candidate Donald Trump ahead of the 2016 election, according to court filings. The firm Joffe worked for, Neustar Security Services, had a Domain Name System (DNS) contract with the office of the presidency in 2016.

Joffe was a confidential informant for the FBI but was terminated “for cause” in 2021, prosecutors said.

Brittain Shaw, one of the prosecutors on Special Counsel John Durham’s team, revealed the information during the questioning of FBI agent David Martin.

Sean Berkowitz, an attorney for Sussmann, raised concerns during closed session, or without jurors in the room, with remarks about Joffe’s status. “Our concern is that the termination of Mr. Joffe sounds prejudicial as though he had been charged or at least raises questions about whether he has been separately charged, that’s a reason for his absence, or that there’s something else going on that they are not hearing about,” he said. He asked the court to limit discussion of Joffe’s status as a source to 2016 to 2018 because it would be prejudicial to explore facts regarding the termination “given that it happened so late and was connected to this case.”

Andrew DeFilippis, another prosecutor, said that Joffe’s termination “really dose concern his conduct in 2016 and is the reason he was terminated.”

The termination happened because Joffe didn’t take the Trump-Russia claims to his handler, but had Sussmann take it on his behalf to another FBI employee, according to DeFilippis.

Cooper, speaking while jurors weren’t in the room, ordered prosecutors not to discuss the topic again. He said how Joffe handled the information was not part of the trial, and noted the termination did not come for years after the events that are being explored during the trial.

Joffe was one of Sussmann’s clients, a group that included Hillary Clinton’s campaign, at the time. Joffe has said he was offered a position in the U.S. government if Clinton won the election, which she did not.

According to prosecutors, Joffe not only conducted opposition research on Trump but enlisted researchers from a university, identified as Georgia Institute of Technology, to help him.

Prosecutors said Joffe, Sussmann, and Perkins Coie, the campaign’s legal firm, engaged in a coordinated scheme to distribute the opposition research to the FBI and media outlets in an attempt to influence the 2016 election.

As part of the effort, Sussmann passed sketchy data alleging a link between Trump’s business and a Russian bank to an FBI lawyer in September 2016. Sussmann claimed he was not bringing the information on behalf of a client, which was false, prosecutors say. Sussmann was charged with lying to the FBI.

Steve DeJong, an executive with Neustar, took the stand later Tuesday, telling the court that Joffe was “very well respected.” He said Joffe asked him, as a favor, in August and September of 2016 to look through data logs to find queries for names in political campaigns.

“In retrospect, it was mostly around the Trump campaign,” DeJong said.

DeJong said he was also doing things for Joffe like gathering data on “DNS traffic between utility companies during a hurricane.” Sussmann, to his knowledge, was not “in any way involved” in collecting or analyzing the data. He had never heard of Sussmann before.