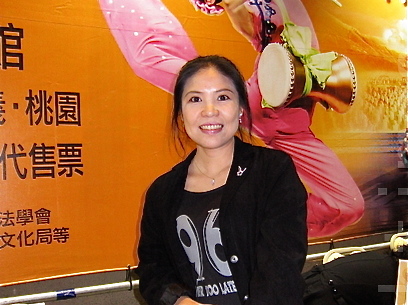 Ms. Yiyuan Lin, who runs Yiwang Digital Technology Company with friends, praised the Shen Yun artists’ dance movements. “It’s hard to believe that the human body can be so agile and superb,” she said.

With an artistic flair, Ms. Lin said she loved to travel around the world and watch performances everywhere. She had planned to be travelling at this time but her friends had told her not to miss this performance, so she postponed her trip. She said she was really amazed by Shen Yun’s performance. “I was really touched to learn that authentic Chinese culture has such profound depth and meaning.”

She also appreciated Shen Yun’s award-winning solo vocalists whose voices, she said, can take simple lyrics and make them far-reaching and profound. “While they were singing, I read the lyrics on the backdrops and found them to be simple words. However, through the vocalists’ singing, the lyrics can have a deep impact on people’s minds and enter their hearts.”

She said Shen Yun had provided a turning point in her life. The song, What Is the Meaning of Life, especially made her reflect, saying, “What’s the meaning of life? What do people always pursue? Is it really for fame and gain? … It’s time for us to let go of it.”

Mr. Chuan-Yin Huang, chief of Dashu District Office, Kaohsiung City, was also in the audience on March 13, along with over 10 colleagues and volunteers.

Mr. Huang said, “The performance was great! Every program was brilliant and classical. I like the song, What Is the Meaning of Life sung by the soprano. Both the meaning of the lyrics and the skills of the vocalist were great! It has profound content.”

He said that Shen Yun’s unique, digital backdrops combined with the story-based and ethnic dance, and the music from the Shen Yun Orchestra, provided an incomparable visual and audio effect.

Mr. Huang said, “I have never seen a performance like this with such a unique dynamic backdrop … It’s so brilliant!”

“The performance opened my eyes. The perfect synchronization of the dances and the dynamic backdrops was refreshing and outstanding. … its profound content and its inspiring effect were the most valuable parts; well worth recommending to others.”

American Institute in Taiwan (AIT) Kaohsiung Branch chief, Gary G. Oba, watched the Shen Yun performance on March 14. He marvelled at the beauty of classical Chinese dance and music, and the colorful costumes. Mr. Oba was pleased to have witnessed the genuine Chinese culture, and believed that Shen Yun would shine a light on all of China.

Being able to transcend language and cultural barriers, Mr. Oba said he appreciated the beauty of the profound ancient Chinese culture presented by Shen Yun. He noted that without language expression, he could still comprehend the exquisite connotations of the dance and music, saying, “This kind of performance is very enlightening.”

“One thing that I think it is very interesting is the use of color. I was going through my mind in the performance, because the colors are very bright, and I know that now when you go to China, mainly because of the industrial pollution and things, the colors aren’t quite so bright. It is covered with a lot of dust. To me, this is kind of like removing the dust and you get to see the original vibrant colors of the culture. So I think it shines a light on all of China but it is a beautiful light,” Mr. Oba said.