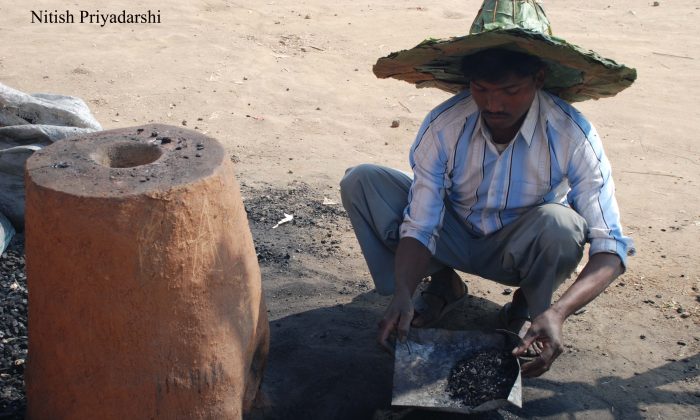 A modern Asur man demonstrating making iron in the traditional furnace in Ranchi city to researchers and media people. (Nitish Priyadarshi)
Beyond Science

Researchers believe that what is now one of the most vulnerable tribes in central India built the ancient Indus Valley Civilization using unique metallurgical knowledge.

The Asurs (which in Sanskrit means “the demons”) is the only tribe in the world today with knowledge of how to extract iron from laterite rocks, while everywhere else it is extracted from hematite and magnetite. This tribe, with a total population of 8,000 today, is believed to be the great builders of the ancient era.

Ashis Sinha, a research scholar and local journalist, stated that the Asurs recognize three varieties of iron ore: Pola (magnetite), Bichi (hematite), and Gota (laterite). “By observation and experience, Asurs were able to locate a site for ores,” he said.

Geologist and researcher Nitish Priyadarshi shared a brief monograph series from 1993 by the Tribal Research Institute located at Ranchi with the Epoch Times, which mentions that the Asurs were originally from Illyria (ancient Greece), had adopted the culture of Babylon and Egyptian civilization, and gave this knowledge to Iran and India.

The report, originally written in Hindi, highlighted that the origin of the Asurs is indicated in many places in ancient Indian literature, like the Rigveda and Upanishads.

“The Asurs of 12 B.C. were the greatest. They established the Mohenjodaro and Harappan Civilizations. They were tall and Herculean in their builds,” the report said.

Yet another research work, “Iron Smelting by Asur Tribe: A Thing of the Past,” by Priyadarshi mentions that by the 16th century B.C., Asurs had conquered the Mediterranean coastal areas, were feared as sea-people, and had advanced up to the Indus river.

“A research report also speculates that it was the Asurs who built the famous Ashoka Iron pillar currently at Delhi,” said Priyadarshi said. The iron pillar is famous for its purity, which exceeds even that of modern smelting methods. It also shows few signs of corrosion, despite being almost completely pure iron.

Sinha explained that many other famous ancient iron monuments, like the iron pillar at Dhar and Iron beam at Konark, as well as Damascus steel, are attributed to Asur metallurgical skills. Sinha has written many articles on the Asurs under the Jharkhand Media Fellowship 2012.

While there are many studies on Asur technology of smelting iron and the extinction of their indigenous knowledge, very few researches report on their origin and about why they are called Asurs.

The research by the Tribal Research Institute says, “According to Banerjee and Shastry [researchers], Asurs were those powerful people who had godly powers in the Vedic period. A long fight broke out between Asurs and Aryans. The Asurs who declined to become Aryans were called Asurs. Thus the word ‘Asur,’ which was initially a symbol of Gods, became a symbol of demons.”

The word “Asur” originates from the Sanskrit word “Sura” which means God; “Asur” makes it the opposite of gods. “The word Asura in the Nirukta [etymology treatise] of Yaaska [an ancient Sanskrit language scholar] means those who are ousted from their positions,” said K.K. Yatheendran, a Sanskrit scholar from Kerala.

According to Yatheendran, in the Amarakosa (a Sanskrit dictionary by ancient Buddhist scholar Amarasimbha) one of the synonyms for the word Asura is “Purvadeva,” or ex-gods.

However, anthropologists say that this name doesn’t stand in lieu with the current identity of the Asurs. Ranchi-based anthropologist Ganga Nath Jha said, “They are morphologically very dark [chocolate] in color and have flattened noses. It’s because of this that others might have named them Asurs.”

Priyadarshi also says that some researchers believe that the Asurs were called so because “sur” in the local language means “sound,” and since they didn’t make any sound or noise while hunting in the forests, thus they were called “Asur” (those who don’t make noise).

The Asurs in India in recent centuries have been residing at Netarhat Plateau in Jharkahand state; this plateau is rich in laterite rocks. However, most of them have today taken to agriculture and the mining industry for livelihood.

“The region they live in is also greatly infested by Naxalism [armed Maoists],” said Jha.