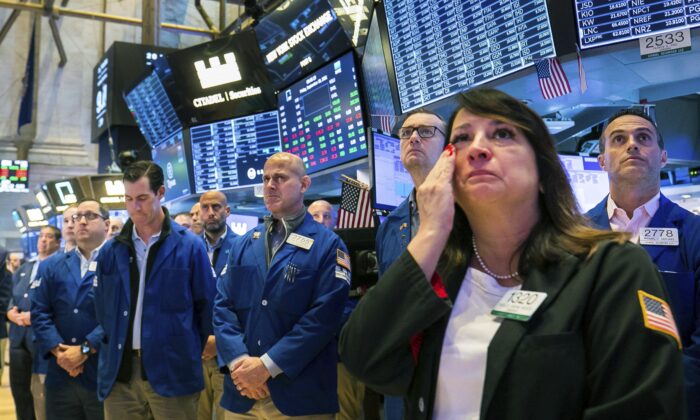 Floor traders, including Phyllis Arena Woods (R), gather in remembrance on the eve of Sept. 11, on the Exchange trading floor, on Sept. 10, 2021. (Courtney Crow/New York Stock Exchange via AP)
Stocks

Wall Street capped a choppy day of trading Friday with another pullback for stocks and the S&P 500’s first weekly loss in three weeks.

Stocks have traded in a narrow range for several weeks as most investors are sitting on the sidelines waiting to get a fuller understanding of where the economy is headed and how the pandemic is impacting corporations.

“There isn’t any new good news coming, and that’s important because we’ve gotten a decent amount of good news that has flowed up until this point this year,” said Liz Young, head of investment strategy at personal finance company SoFi.

Federal Reserve policymakers have said they believe inflation this year would be temporary and is a result of the economy recovering from the pandemic. However, persistently high inflation could force the Fed’s hand to start pulling back on its bond-buying program and low interest rate policy sooner than anticipated.

The bond market had a mild reaction to the inflation data, a possible sign that investors continue to agree with the Fed’s outlook. The yield on the 10-year Treasury note rose to 1.33 percent from 1.30 percent.

Apple fell 3.3 percent after a federal judge ordered the iPhone maker to dismantle part of the competitive barricade guarding its closely run app store, which is one of its biggest moneymakers.