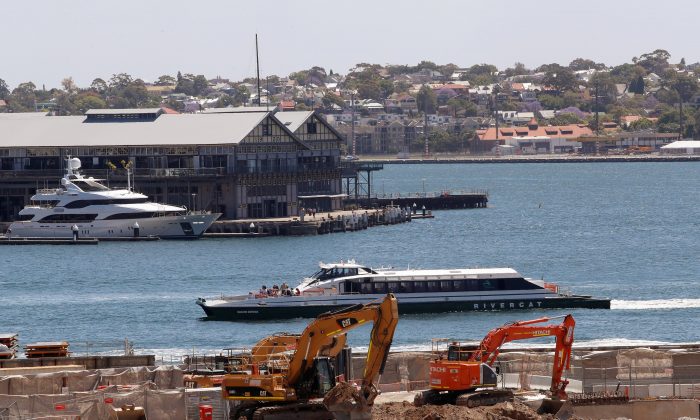 The tech invasion–with locals now dubbing Martin Place, once the heartland of the finance sector, ‘Silicon Place’–has tightened the office rental market and helped drive down the city’s vacancy rate to a near-decade low, according to property manager Jones Lang Lasalle.

The premium of Australian property yields to 3-year term deposit is close to record highs, and gross rents in Sydney have risen by nearly a quarter in the 12 months to September.

“The global economy is on an upswing and you’ve got a geographically constrained market in Sydney. I’d call it a perfect storm,” said Trent James, office property portfolio manager at Charter Hall Office Trust.

Amazon, among the latest tech heavyweights to expand in Australia, has snapped up a sprawling nine-floor office in the city’s financial hub, with sweeping views of Sydney Harbour Bridge and Hyde Park.

Nasdaq-listed cloud computing firm LogMeIn has taken over two floors in a Martin Place building that also houses a glitzy Tesla showroom, in what it calls its new Asia-Pacific headquarters.

Martin Place, once dominated by the country’s major banks–which have mostly decamped to other locations in the central business district–now also has Facebook and Alphabet’s Google among its residents.

As new entrants come in and existing residents expand, several time-worn buildings have been demolished to make way for the high-tech spaces now in vogue.

But office property managers and landlords don’t expect new supply to come in before 2020, meaning the market will remain tight for the next couple of years at least.

The building spree should add to growth and boost employment in the construction industry, a big plus as Australia’s A$1.7 trillion economy transitions away from a once-in-a-decade mining boom.

“Sydney and Australia are very similar to the United States in terms of technology adoption, growth and maturity. It’s a nice gateway to Asia,” said Lindsay Brown, Asia-Pacific vice president at LogMeIn.

“Sydney’s CBD is a tight market for office properties so we had a bit of luck and good timing to secure this place.”

National Australia Bank (NAB) has said it will have a large office in the western suburb of Parramatta by 2020, making it the country’s first major lender to have a significant presence there. Headquartered in Melbourne, NAB has another office in Sydney’s CBD.

“It’s an expression of confidence in your business moving forward that you’re ultimately going to need more space. Because, quite simply, real estate is a cost.”

The activity comes amid signs that Australia’s biggest home-building boom is leveling off and the government embarks on major infrastructure projects, with plans to spend A$75 billion over the next 10 years, including on major rail and road connections.

The value of total buildings approved in Australia is the second-highest on record, and infrastructure activity is at a decade high.

“All the infrastructure that’s happening around Sydney right now makes it a very dynamic economy,” JLL’s Ballantyne said. “That also makes Parramatta a much more desirable place to work than it was 20 years ago.”

Shares of most office property funds have outperformed returns on the benchmark stock index this year, with Charter Hall rising 27 percent and developer Goodman Group up 19 percent. The S&P/ASX 200 index has added 6 percent so far this year.

However, retail landlords have fared less well, amid worries that Australia’s retail sector could suffer at the hands of Amazon.com, which has yet to spell out its full strategy for the local market.

Shares of Vicinity Centres, which manages shopping centers around Australia, have fallen almost 8 percent this year, and Stockland shares have gained just 1 percent.

Private equity giant Blackstone Group has called off the sale of its A$3.5 billion Australian shopping mall portfolio as Amazon’s arrival has spooked buyers of bricks-and-mortar stores.

Also, the Reserve Bank of Australia (RBA) has cautioned investors as growth in commercial property prices has outpaced the increase in rents. The central bank is worried that highly leveraged investors could be caught out if global interest rates see a marked increase.

“Typically, they could then be required to provide additional equity, potentially triggering sales and further price falls,” the RBA said in its latest half-yearly financial stability review.