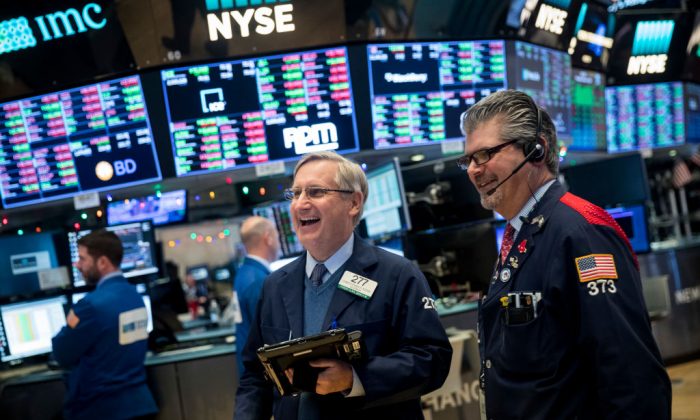 Traders on the floor of the New York Stock Exchange on Jan. 4, 2018. (Drew Angerer/Getty Images)
Business

Last year was a respectable period for global initial public offerings, which saw the New York Stock Exchange regain its title as the most attractive stock exchange, leading the way in money raised.

More than 1,624 initial public offerings (IPOs), raising a combined $189 billion, were made in 2017, according to EY data. Nearly 175 IPOs were floated in the United States, raising almost $40 billion, an increase of 84 percent in proceeds and 55 percent in number compared to 2016.

In hindsight, 2017 seems like a particularly bountiful year for IPOs, considering the traditional powerhouse of IPOs—the technology industry—only saw one major listing, Snap Inc., owner of the Snapchat social-networking application. And that IPO was a disappointment, as Snap’s shares tumbled more than 39 percent the rest of the year after its March 2017 listing.

Bankers hope technology companies will drive IPO listings to further heights in 2018. While easier access to private capital is a trend that has delayed the typical timing of IPO for technology firms, there could be several big names seeking a listing this year, including a few startup “unicorns,” or firms valued at more than $1 billion.

Airbnb connects short-term renters to owners of houses, apartments, and lodges. Founded in 2008 by Brian Chesky, Joe Gebbia, and Nathan Blecharczyk, Airbnb has been a thorn in the side of the hotel industry for years.

Airbnb has expanded aggressively over the last few years, with property listings on all major continents. Over the last year, the company has positioned itself as more than a rental-listing site, by promoting “travel experiences” and offering local tours. It also purchased Montreal-based Luxury Retreats, a luxury vacation rental platform, to expand into the higher-end segment of the market.

The company’s latest funding round—a Series F follow-on—was in March 2017, raising around $450 million from Google Capital and TCV, according to venture capital database Crunchbase. The fundraising valued Airbnb at around $31 billion.

Should Airbnb choose to go public in 2018, it will likely prove to be one of the most highly sought after listings in recent years.

Swedish music-streaming service Spotify expects to list its shares early this year, but not through a traditional IPO.

Spotify is aiming to list its shares in a so-called “direct listing” onto the New York Stock Exchange. A direct listing on an exchange means existing shareholders will be able to sell their shares directly on a public stock exchange.

This allows Spotify to avoid hiring investment banks or going on roadshows to market its stock. It won’t have to pay high underwriting fees to banks, and can simply make its existing shares—held privately by founders or venture capital investors—available for the public to purchase.

A direct listing is highly unusual and introduces risks. Without underwriters to provide an initial price range, it will be difficult for the public to value Spotify’s share price at the outset. And without roadshows, Spotify won’t enjoy the support of committed institutional investors, who typically purchase large blocks of IPO shares and serve to instill confidence in the eyes of retail investors.

As such, after its direct listing, Spotify’s share price could swing wildly for early investors before the market arrives at a value consensus.

In its last funding round—series G—Spotify raised $526 million from 16 investors at a pre-money valuation of around $8 billion, according to Crunchbase.

Cloud-based file-sharing startup Dropbox Inc. confidentially filed regulatory paperwork for an IPO, with expected listing date sometime in the first half of the year, according to a Jan. 11 Bloomberg article. The confidential IPO filing was previously only available for small businesses, but the Securities and Exchange Commission opened up this IPO channel to larger issuers last summer.

Dropbox, founded by Arash Ferdowsi and Drew Houston, last completed its series D equity financing in 2014, with a pre-money valuation of around $10 billion, according to Crunchbase.

It’s unclear how the market will ultimately value Dropbox, which exists in a highly competitive industry with several capable and high-profile rivals. Besides Box Inc., which had its IPO three years ago, Dropbox must compete with deep-pocketed technology giants such as Apple, Microsoft, Google, and Amazon.com, all of which have established cloud storage services. In addition, Dropbox is fending off a number of smaller upstart rivals.

While private valuations are not publicly available, it is widely believed on Wall Street that major investors are currently valuing Dropbox below its high water mark of $10 billion from 2015.

While its latest fundraising round may suggest that Lyft should have enough cash to continue its aggressive expansion, The New York Times reported in late December that it has begun talks with investment banks about an IPO in 2018.

Besides traditional IPOs, a new, novel way of fundraising has garnered the attention of the public.

Riding a wave of elevated interest in cryptocurrencies and the significant rise of bitcoin and ether—the two leading cryptocurrency tokens at press time—initial coin offerings (ICOs) have become an intriguing way for startups to raise capital directly.

ICOs bypass stock exchanges entirely. They operate more like crowdfunding, and it should be noted that the companies issuing such cryptocurrencies are not selling equity ownership—which would put ICOs in the jurisdiction of regulators. In addition, the ICO market is not currently regulated, giving rise to potential scams and frauds. For example, the SEC and Canadian regulators in December 2017 filed charges against Dominic Lacroix, a Canadian national and head of PlexCorps, which conducted an ICO last year for a cryptocurrency called PlexCoin.

While statistics are hard to come by in such a nascent market, ICO tracker CoinSchedule estimates that 2017 had a total of 235 ICOs, raising a combined $3.7 billion. The top three ICOs during 2017 in initial capital raised were Filecoin, Tezos, and EOS.