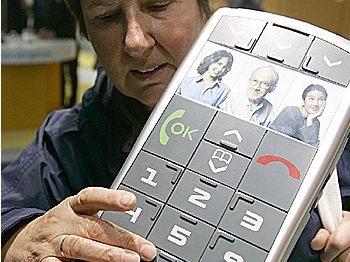 Joshua Philipp
Joshua Philipp is an award-winning investigative reporter with The Epoch Times and host of EpochTV's "Crossroads" program. He is a recognized expert on unrestricted warfare, asymmetrical hybrid warfare, subversion, and historical perspectives on today’s issues. His 10-plus years of research and investigations on the Chinese Communist Party, subversion, and related topics give him unique insight into the global threat and political landscape.
View profile
Follow
biggersmaller
Print
A new law will make technology more accessible to disabled people living in the United States by requiring companies to include services for individuals with vision or hearing loss.

The 21st Century Communications and Video Accessibility Act was signed into law by President Barack Obama on Oct. 8.

Several technologies will be required to provide services for the vision and hearing impaired, including TV programs, the Internet, and smartphones.

“Now, the bill I’m signing today into law will better ensure full participation in our democracy and our economy for Americans with disabilities,” said Obama in a White House transcript.

He said the law “will make it easier for people who are deaf, blind or live with a visual impairment to do what many of us take for granted—from navigating a TV or DVD menu to sending an email on a smartphone.”

“It sets new standards so that Americans with disabilities can take advantage of the technology our economy depends on,” Obama said. “And that’s especially important in today’s economy, when every worker needs the necessary skills to compete for the jobs of the future.”

The new law requires mobile phone companies to make services including Web browsing, text messaging, and e-mail on smartphones accessible to the disabled.

It also expands requirements for cable companies to give access to individuals with impaired vision, including to emergency broadcast information; it gives $10 million a year for assistive technology for the deaf and blind; and requires Internet-enabled mobile phones to include services for the hearing impaired, according to the American Foundation for the Blind (AFB).

The bill was passed the same week as Rosa’s Law, which Obama signed on Oct. 5. The bill, named after Rosa Marcellino, 9, will remove the words “mentally retarded” from all federal health, education, and labor laws, and will replace the words with “intellectually disabled.” It is based on the concept that the words used to refer to someone also affect the way an individual is treated.

“So together, these changes are about guaranteeing equal access, equal opportunity, and equal respect for every American,” Obama said.

The AFB applauded the passing of the 21st Century Communications and Video Accessibility Act. The national nonprofit organization works for possibilities for individuals with vision loss.

"This law is life-changing for the millions of us with disabilities who are too often unable to take advantage of new technologies," said Paul Schroeder, vice president of programs and policy at the AFB.

"It opens the door to the digital age, and gives Americans with visual or hearing impairments equal access to smartphones, emergency broadcast information, the menus and controls on televisions and cable TV guides, and much more,” Schroeder said.

The organization’s president and CEO Steve Largent issued a statement commending the individuals who helped move the bill into law “for their commitment to ensuring that every American has access to cutting-edge wireless products and services."