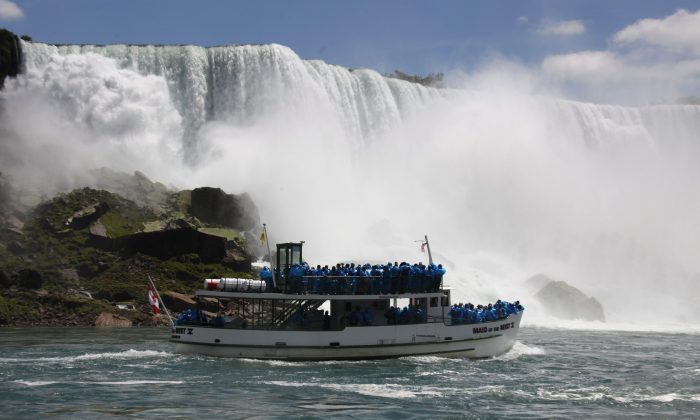 The Niagara Falls is the major attraction of the Niagara Region, but tech CEO Kyle Tkachuk wants the region to become a hotspot for tech entrepreneurship. (AP Photo/David Duprey, File)
Companies

The Niagara Region is typically associated with Ontario’s wine country, tourism, and golf, but entrepreneur Kyle Tkachuk wants it to become a hub for tech innovation.

Tkachuk, 45, says the next Silicon Valley is taking shape in southern Ontario and Niagara should be a part of it.

He’s the founder, president & CEO of Clickback, based in St. Catharines in the Niagara Region on the southwestern edge of Lake Ontario.

“Our goal is to really expand out that corridor between Waterloo and Toronto that’s started to be cloned as the Silicon Valley of the North,” Tkachuk said in a phone interview. “We want Niagara to be a part of that.”

He’s been in business since 1996 and building Clickback since 2000 his own way—a product of Niagara. He got help from government programs instead of participating in a private incubator or accelerator or relocating elsewhere. He never received funding from an angel investor or venture capitalist.

Its latest product, Clickback Web, can identify visitors to a company’s website and convert them into leads for potential business.

Tkachuk explains that, as a rule of thumb, 6 percent of visitors to a company’s website will fill out a form providing the contact info for future marketing efforts.

“The problem that the world has is that the other 94 percent really go unknown,” Tkachuk said. “So there’s obviously lost leads there.”

He says Clickback can increase the 6 percent to 25 to 35 percent on average and, in some industries, get as high as 40 percent.

The company’s revenue has grown nearly 700 percent in the last five years and the company now has more than 30 employees. It was identified among Canada’s fastest-growing companies on Profit 500’s 2017 rankings.

“There’s no problem that can’t be solved,” Tkachuk said. “You just have to take the time to uncover and understand the problems that you’re faced with as an entrepreneur.”

Tkachuk advises young entrepreneurs to build a trusted network of contacts to act as a sounding board.

And like other Canadian entrepreneurs, Tkachuk plans on “paying it forward” through a new innovation hub in Niagara.

Clickback recently purchased a six-story architectural building in downtown St. Catharines, which it plans to turn into the first private accelerator in Niagara.

“We’ve got great minds here, great education with Brock U and Niagara College, amazing options for young entrepreneurs coming out of school to set up shop right here in Niagara without having to go to Toronto or Buffalo,” Tkachuk said.

The advantage is the proximity to Toronto but with a much lower cost of living.

Accelerators can help address Canada’s long-standing challenge, which hasn’t been starting companies, but scaling them into commercially viable businesses. Tkachuk thinks Canada is getting better at growing companies also because of venture capitalists’ interest.

“I’ve probably been contacted by upward of 15 venture capitalists in the last two weeks,” Tkachuk said. “So they’re very aggressive, they want to help Canadian companies because they know Canadian companies traditionally might be a little more conservative than U.S. companies.”

They say intellectual property (IP) is the currency of today’s knowledge-based economy. Countries with stronger IP rights tend to experience stronger economic growth through encouraging foreign investment and research and development. Many advise tech companies to establish patents for their software or processes right from the get-go.

However, Tkachuk made a corporate decision early on not to go this route. He doesn’t believe it’s worth it to share with the world his competitive advantage if he’s unable to monitor violations of his IP.

“If that [protecting your IP] helps you sleep better at night, go for it. But unless you have people weekly or monthly scanning the internet and confirming that no one is breaking that patent, it’s virtually useless,” he said.

No Better Time to Be an Entrepreneur
“It’s very hard to protect software,” Tkachuk added, fully realizing that some people may disagree with him. But the rate at which Clickback’s software is changing would require frequent updates to patents, which, he says, hasn’t made much sense to him.

For him and Clickback, the biggest challenge is getting good, qualified people. Graduates are often attracted to the United States and the Toronto–Waterloo corridor. Tkachuk hopes that will change in the near future with the new center for innovation at 110 James St. in St. Catharines slated to open in December.