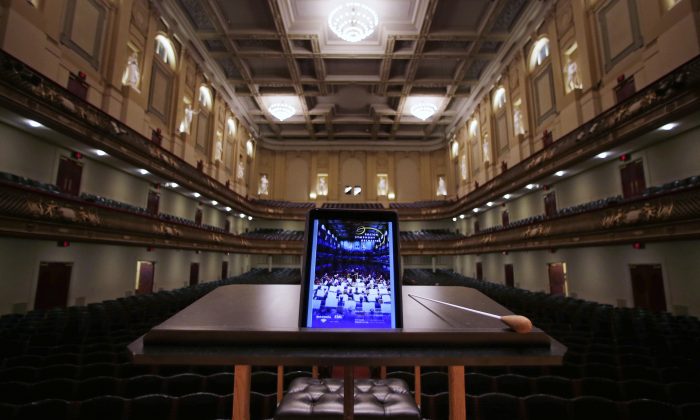 In this Friday, Jan. 15, 2016, photo, an iPad with a Boston Symphony Orchestra interactive program is displayed on the conductor's stand at Symphony Hall in Boston. (AP Photo/Charles Krupa)
Tech

BOSTON — A night at the symphony usually means silencing cellphones and mobile devices before the music starts.

But as part of an effort to draw in a younger audience, the Boston Symphony Orchestra is loaning select patrons iPads loaded with content specific to each performance.

They’ll be able to view sheet music for the pieces being played, video interviews with musicians, podcasts about the composers and analysis on the works themselves. They’ll also get a close-up view of the conductor from the musicians’ point of view from video monitors set up in the hall.

The storied orchestra, which was founded in 1881, is the first to offer audience members use of customized iPads, according to Kim Noltemy, the group’s chief operating and communications officer.

But other orchestras are also trying to incorporate technology.

The Philadelphia Orchestra is among a handful that has developed its own mobile application to let audience members follow along with program notes, like translations of vocal parts, in real time from their personal devices.

And the Sacramento Philharmonic and Opera, Virginia Symphony Orchestra are among those offering “tweet seats,” specially designated sections where concertgoers are encouraged to interact on Twitter with a concert official as they gave running commentary during select performances.

Jesse Rosen, president and CEO of the League of American Orchestras, an approximately 800-member group based in New York, says orchestras are trying to appeal to a new generation’s changing expectations for the concert experience.

“It’s about enhancing the visual experience of listening to a symphony orchestra,” he says. “It’s also about making the experience more intimate and creating a more visible contact between the performer and the audience, which is something younger audiences really seem to value.”

The Boston orchestra is rolling out the iPads as part of a broader effort to draw patrons, particularly younger ones, to their underperforming Friday concerts.

During “Casual Fridays,” symphony tickets are being offered at significantly lower prices, ranging from $25 to $45, down from as much as $145, patrons are being encouraged to dress casually, and the hall is hosting pre- and post-concert receptions with live music, snacks and a cash bar.

The first performance was Jan. 15; two others have so far been scheduled for Feb. 12 and March 18.

Efforts to appeal to new audiences are not without opposition from symphony traditionalists.

“There’s been resistance all along to screens in concert halls” observes Rosen, of the League of American Orchestras.

Jeremy Rothman, vice president for artistic planning at the Philadelphia Orchestra, says concerns over its LiveNote app, which debuted this season at select concerts, have diminished as concertgoers and musicians alike saw the technology in action.

The app, he says, has helped some patrons become more informed and therefore more engaged in the performance while the app’s design — grayscale text on a black background — minimizes the impact on others.

“No one is more concerned about preserving the live concert experience as we are,” Rothman says. “This is absolutely at the core of what we do. So we asked a lot of the really hard questions up front and are continuing to listen to feedback now that we’ve put it in people’s hands.”

In Boston, Noltemy says the symphony orchestra has taken steps to make sure it isn’t alienating its core audience.

For now, the iPads will be offered only to the 110 people seated in the rear orchestra. That section is under the balcony overhang, she notes, helping limit the impact of screen glow on other audience members.

The devices will also be on a dim setting, and patrons will be given headphones to tune into the video and audio segments.

“We’d prefer people watch the iPad podcasts before the concert during the pre-concert reception,” Noltemy says. “But, as you can imagine, we have no control over that.”