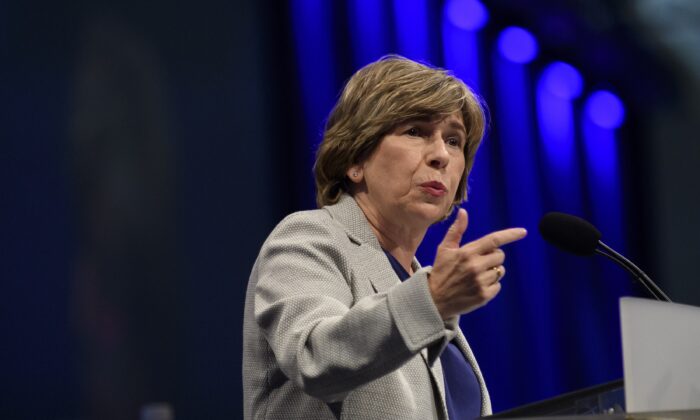 American Federation of Teachers (AFT) President Randi Weingarten, whose organization advocated for mask mandates in public schools, apologized after she was caught with her mask down at the 2021 SOMOS conference in Puerto Rico.

“Gotta love when school leaders @rweingarten @DOEChancellor mingle with others in a packed room with no masks,” Aviles wrote, “yet I wonder if everyone needed proof of Vax to attend this ‘work vaca’…they sure didn’t need masks.”

In an attempt to defend her action, Weingarten wrote in response to Aviles’ post that all guests at the event must have proof of vaccination, and that she had just tested negatively for COVID-19 via rapid test. That being said, she apologized and admitted that educators should follow the same rules as students.

“You could not be #Somos or the hotel or panel without proof of vaccination. I had also just done a rapid Covid test & was negative,” she wrote. “Frankly I think you are right. If kids are wearing masks in schools to protect themselves & others educators must wear masks inside as well. I’m sorry.”

Weigarten was then called out by Daniella Jampel, who argued that the union boss should end her support for mask mandates. Jampel is a founding member of Keep NYC Schools Open, a parent-led group founded in November 2020 when the United Federation of Teachers, an AFT affiliate, pushed to shut down the city’s entire public school system because the citywide average COVID-19 positivity rate surpassed a 3 percent threshold.

“You enjoyed not having to wear a mask, right?” Jampel asked Weingarten on Twitter. “While students in the city you live in—many of whom are vaccinated—have to wear their masks for 6+ hours every day, even outdoors, while they’re in school. If you claim to be pro-student, as you claim, it’s time to take a stand.”

Weingarten responded to Jampel that she had to take her mask off because “people were having a hard time hearing us.” She also said she wears a mask “most of the time indoors.”

Another prominent SOMOS attendee who came under fire for breaking the mask rule was Senate Majority Leader Chuck Schumer (D-N.Y.), who was spotted in a packed hotel conference room dancing to celebrate the passage of the $1.2 trillion package without his mask on, an apparent violation of Puerto Rico’s COVID-19 restrictions.

Despite a nearly 70 percent vaccination rate among the island’s adult population, Puerto Rico currently requires masks in indoor settings, regardless of an individual’s vaccination status. It also requires mask at both indoor and outdoor events with more than 50 attendees.