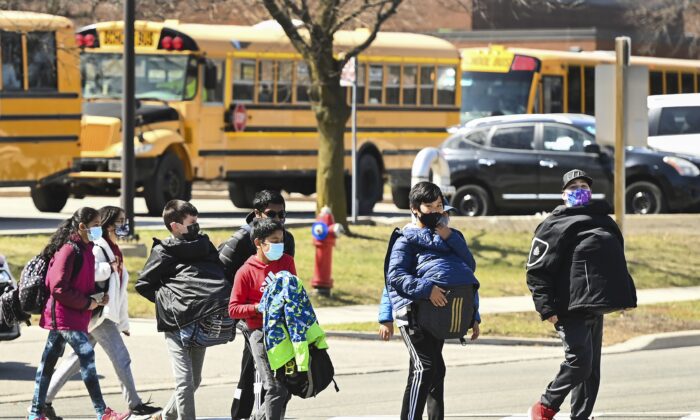 Students cross the street on their way to school in Mississauga, Ontario, on April 1, 2021. (Nathan Denette/The Canadian Press)
Canada

A retired teacher is filing a defamation lawsuit against Waterloo Region District School Board (WRDSB) and its board chair for calling her “transphobic” and ordering her to stay home from school after she raised questions about the age-appropriateness of sexual content in children’s books in an elementary school library earlier this year.

Carolyn Burjoski, who worked as a WRDSB teacher for 20 years, announced her legal action in a video on May 4, saying that the incident exposed “a serious problem” that school boards are “using language and human rights legislations as weapons to silence anyone who questions their policies.”

“In my view, the message to all teachers is clear: ‘If you speak up, you will be punished,'” she said.

“I am deeply concerned by the punitive way that the board and its chair acted in this matter. Therefore, I have filed a defamation claim with the Ontario Superior Court of Justice against the WRDSB, and its Board Chair Scott Piatkowski to hold them accountable for their words and actions.”

During a Jan. 17 Board of Trustees meeting, Burjoski read excerpts from a book titled “Rick,” by Alex Gina, in which the main character Rick questions his sexuality because he’s not thinking about naked girls, and later declares an asexual identity after joining the school’s rainbow club. Burjoski expressed concern that such stories could send the wrong message to children who have not developed sexual feelings at that age.

“It concerns me that it leaves young boys wondering if there is something wrong with them if they aren’t thinking about naked girls all the time. What message does this send to girls in Grade 3 or 4?” she said at the time. “They are children. Let them grow up in their own time and stop pressuring them to be sexual so soon.”

Piatkowski interrupted Burjoski’s talk at that point, warning her against making comments that he said would violate Ontario’s Human Rights Code. He later ejected her from the virtual meeting, despite challenges from some board members against his decision.

Burjoski said the WRDSB removed the video of the board meeting from its website “so people could not hear for themselves what I actually said.”

The day after the meeting, Burjoski said she was told by human resources that she was “assigned to home” and prohibited from speaking to her students and colleagues, while pending a formal disciplinary investigation.

But she said the real impact came after Piatkowski gave interviews to multiple media immediately after the board meeting to describe her comments as “transphobic.”

“Over the next few days, I became the centre of a national media frenzy, fuelled by statements made by the board chair on radio, TV, and social media. He attributed to me remarks that I did not make, characterized them as hateful, and accused me of violating the Human Rights Code,” Burjoski said in her latest video.

“The enormous stress on me and my family from these events has been overwhelming. On Jan. 22, I suffered a breakdown from extreme anxiety and was taken to the hospital by ambulance. I am still in recovery from this trauma.”

Just days before Burjoski’s retirement, the investigators summoned her for questioning, during which she said she was required to sign a “gag order.” The investigation was halted after Burjoski’s doctor placed her on medical leave.

To fund her litigation, Burjoski has launched a fundraiser on GoFundMe with a goal of $100,000. The fundraiser had reached over $12,500 as of May 6.

On her GoFundMe webpage, she also spelled out her concerns about the WRDSB’s lack of transparency in its “culling” of school libraries’ and teachers’ personal collections of books it deems harmful.

“Although the culling was already underway, the Board could not answer the reporter’s request for the criteria being used, nor could the Board explain how the team was chosen. Teachers were not informed about the fate of our own collections,” she wrote.

“I read some of these new books in our elementary school library and was shocked by the content. I felt that I needed to speak up to safeguard children in our schools.”