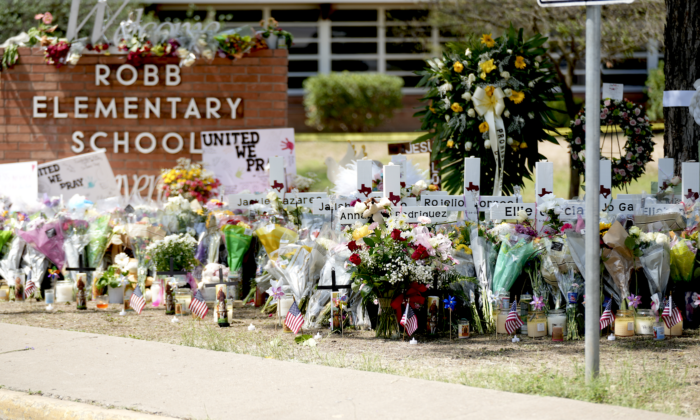 Panicked children and teachers placed half a dozen calls to 911 emergency services from the Texas classrooms where a massacre was unfolding, according to an official on Friday, who also said that a teacher propped open a door minutes before the shooter entered.

At least two children called the 911 emergency number from the two connecting classrooms after 18-year-old Salvador Ramos entered with a rifle, said Steven McCraw, director of the Texas Department of Public Safety.

Some of the students trapped in the classrooms with the shooter survived the massacre, including at least two who called 911, McCraw said, though he did not offer a specific tally.

Ramos also entered Robb Elementary School in Uvalde through a door that was propped open by a teacher just minutes before, McCraw added. McCraw said that there was also no school resource officer at the school, and he could not say why. The officer, he said, later responded when someone called 911.

At around 11:27 a.m. Tuesday, the teacher propped open the door at Robb Elementary, coming about 1 minute before Ramos crashed his vehicle nearby, McCraw said. The same teacher about two minutes later at 11:30 a.m. reported the crash and a male with a gun.

It’s not clear why the teacher propped open the door or didn’t close it after seeing the suspect crash.

The on-site commander, McCraw said, thought Ramos was barricaded in a classroom and that children weren’t at risk, giving police time to prepare.

“From the benefit of hindsight where I’m sitting now, of course, it was not the right decision,” McCraw said. “It was the wrong decision” to delay engaging with the suspect, he added.

In all, 21 people, including 19 children, were killed by Ramos in the attack. The shooter was also killed by responding law enforcement officials.

“A decision was made on the scene … that this was a barricaded subject situation, there was time to retrieve the keys and wait for a tactical team with the equipment to go ahead and breach the door and take on the subject,” he said, adding that he wasn’t there at the time. “At that point, that was the decision, that was the thought process.”

Someone whom McCraw did not identify called the 911 line multiple times starting at 12:03 p.m., telling police in a whisper that there were multiple dead and that there were still “eight to nine” students alive, the colonel said. One student called at 12:47 p.m. and asked the operator to “please send the police now.”

Officers did not go into the classroom until 12:50 p.m., according to McCraw, when the U.S. Border Patrol tactical team used keys from a janitor to open the locked door and kill Ramos.