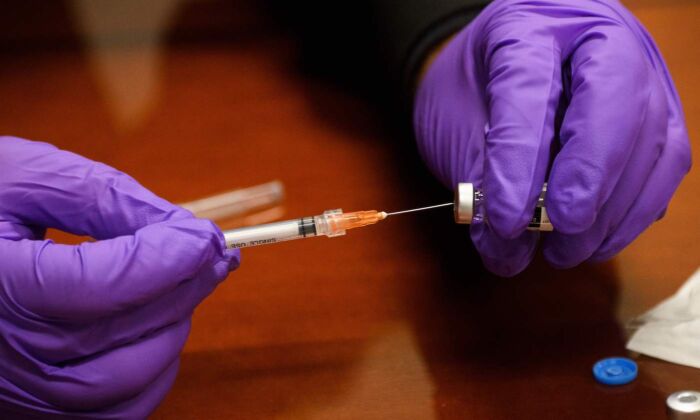 Colorado State University has told unvaccinated students they face being trespassed from its campus if they do not get innoculated, or claim an exemption. (Patrick T. Fallon/AFP via Getty Images)
Vaccines & Safety

A New York public school science teacher has been arrested after she was accused of vaccinating a 17-year-old student without parental consent.

Nassau County police said in a news release that Laura Parker Russo, 54, appeared to give a student a dose of what appeared to be a COVID-19 vaccine at her home in Sea Cliff, a village on Long Island.

The teenager, who has not been publicly identified, later told his mother after he went home, according to the release, and the mother called the police.

Russo was arrested on New Year’s Eve, police said, noting that the teacher at Herricks High School in New Hyde Park is not authorized to administer vaccines.

“The mother had not given permission or authority to have her son injected with a COVID vaccine and called police,” the Nassau Police Department in New York said. The department added that after it conducted a thorough investigation, they also found out Russo “is not a medical professional or authorized to administer vaccines.”

Fino M. Celano, the superintendent of Herricks Public Schools, said in a statement that Russo has since been removed from the classroom and reassigned.

“The individual in question is a district employee who has been removed from the classroom and reassigned pending the outcome of the investigation,” Celano told The Washington Post.

“As this is a matter of personnel, the district has no further comment,” he added.

Russo has been charged with New York State Education Law Unauthorized Practice of a Profession, police said. She has a criminal court appearance hearing scheduled on Jan. 21, and if convicted, the biology teacher could face a four-year prison sentence.

The teenager had reportedly wanted to be vaccinated against COVID-19, the disease caused by the CCP (Chinese Communist Party) virus. The state of New York requires parental consent for COVID-19 vaccinations.

Police say it is still unclear how Russo obtained what appeared to be a COVID-19 vaccine. The department also said it is unclear what brand Russo allegedly administered to the teenager.

Currently, the Pfizer-BioNTech shot is the only COVID-19 vaccine authorized for use in Americans younger than 18.

In a video of the incident obtained by WNBC, the teacher can be heard saying “there you go, at-home vaccine,” before she appears to administer a vaccine to the teenager.

“Proper vaccine administration is critical to ensure that vaccination is safe and effective,” the Centers for Disease Control and Prevention (CDC) states on its website.

The CDC also emphasizes the importance of following infection prevention guidelines when preparing vaccines, including proper handling, preparing, and storing medications and injection equipment, and supplies “to prevent microbial contamination and infection.”