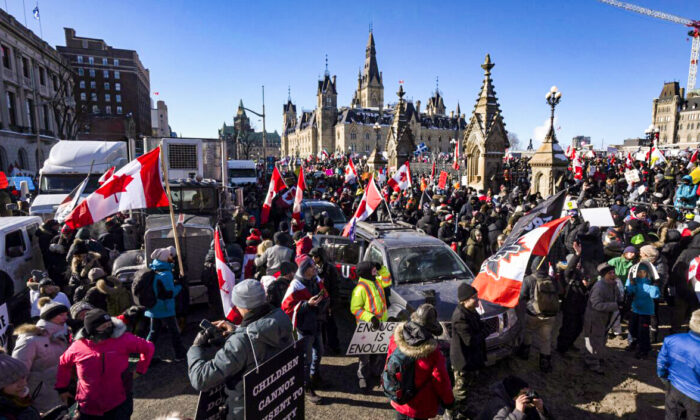 Protesters stand on the back of a truck during the Freedom Convoy demonstrations against COVID-19 vaccine mandates and other restrictions on Parliament Hill in Ottawa on Jan. 29, 2022. (Adrian Wyld/The Canadian Press)
Companies

TD Bank confirmed that it has frozen two bank accounts that held $1.4 million in Canadian currency (US$1.1 million) in deposits to support the trucker-led protests in Canada.

The Toronto-based financial institution has appealed to the Ontario Superior Court of Justice to obtain the funds, with the intention of returning the cash to donors “who have requested refunds but whose entitlement to a refund cannot be determined by TD,” a spokesperson for TD—short for Toronto-Dominion—Bank told news outlets on Feb. 12.

One of the bank accounts received a lump sum of $1 million in Canadian currency via the crowdfunding platform GoFundMe, while the rest—about $300,000 Canadian dollars—was sent to a second account through several bank electronic transfers, a TD spokesperson told Reuters. The spokesperson said the bank doesn’t know where the GoFundMe payment originated.

“There are significant questions surrounding the legal basis under which TD Bank seized donation funds and applied to transfer them into court,” Jay Cameron, a spokesperson for the Justice Centre for Constitutional Freedom, a group representing the protesters, told The Epoch Times on Feb. 14.

Keith Wilson, an attorney for the convoy, said TD Bank was put “on notice that their actions are improper and disappointing” after the accounts were frozen, Reuters reported.

“We are also going to be taking the Ontario government to court to seek an immediate lifting of what we consider to be an unlawful order,” he told the news service.

About a week before TD Bank’s decision, GoFundMe blocked donations to a fundraiser for the Canadian trucker-led Freedom Convoy and said it would return refunds. In a Feb. 7 statement, GoFundMe said that all donations were refunded, and it claimed to have had “multiple discussions with local law enforcement amid police reports of violence and other unlawful activity,” without providing any evidence.

“Many politicians and media outlets, including The New York Times, Wall Street Journal, and National Post, have remarked on the peaceful nature of the protest against the authoritarian vaccination mandates,” Cameron told The Epoch Times.

GoFundMe has drawn criticism for canceling fundraisers for the defense fund of Kyle Rittenhouse, lawsuits against vaccine mandates, and other causes. GiveSendGo, a rival crowdfunding website, instead took up the fundraising for the Freedom Convoy, a protest that seeks an end to vaccination mandates for cross-border drivers as well as other pandemic restrictions.

The Ontario Superior Court on Feb. 10 ordered GiveSendGo to freeze all funds that were donated via GiveSendGo; the platform wrote on Twitter that it would defy the court order.

When GoFundMe announced that it would suspend the fundraiser, Jon Carpay, the head of the Justice Centre for Constitutional Freedom, told The Epoch Times that GoFundMe needs to make the evidence about “violence” and “unlawful activity” public.

“Normally, law enforcement is not at all shy about showing evidence to the public, and that evidence would have to show that the individual is actually a member of the Freedom Convoy. It could be some agitator who is deliberately seeking to discredit the freedom convoy. So what evidence is there that this alleged criminal was even involved with the Freedom Convoy?” Carpay said.

Several spokespersons for TD Bank didn’t respond by press time to requests by The Epoch Times for comment. GoFundMe officials also haven’t responded to a request for comment.