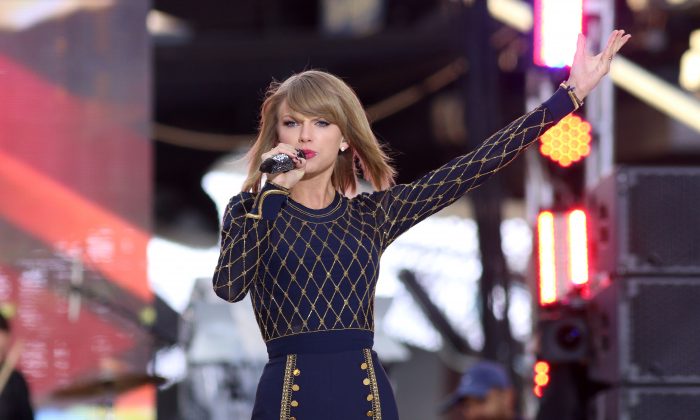 Ever since Taylor Swift entered the music scene, her look has pretty much remained consistent: red lips and variations of blond hair—bob, long, wavy, and or tussled. But for “Vogue’s” May Issue, Swift, donning a sparkly YSL dress and booties, is sporting a new hair color—platinum blond with that signature red lip.

I decided I was going to live my life a little bit without the pressure on myself to create something.
— Taylor Swift

Swift returned to her childhood town of Reading, Pennsylvania, on Feb. 20, where she was the maid of honor for her childhood friend, Brittany Maack. Vogue’s Jason Gay caught up with her at the wedding for an interview, where she discussed everything from her mother’s dreams for her to dating, upcoming ventures and short-term goals.

As Taylor and her mother passed green pastures in Reading, Swift shared that she rode horses as a child. “That was kind of my mom’s thing,” said Taylor. “She really wanted me to be a horseback rider, and I did it competitively until I worked up the nerve at age twelve to tell her I didn’t really love it like she loved it. I just wanted to make music and do theater.”

Music has worked out well for the 26-year-old—to put it lightly.

Swift is a 10-time Grammy Award-winner, including Album of the Year in both 2009 and 2015. Her latest album, “1989” has sold over five million copies and its only going to get busier for the Apple Music affiliated artist. Or is it?

“I have no idea,” she says, with a sigh that’s more blissful than anxious. “This is the first time in ten years that I haven’t known. I just decided that after the past year, with all of the unbelievable things that happened … I decided I was going to live my life a little bit without the pressure on myself to create something,” said Swift when asked what she has next on her plate.

The songstress assures she isn’t leaving music behind. “I’m always going to be writing songs,” said Swift. “The thing is, with me, I could very well come up with three things in the next two weeks and then jump back into the studio, and all of a sudden the next record is started. That’s an option, too.”

She continued on to say: “I would really like to take a little time to learn things; I have lots of short-term goals” that includes learning CPR, how to change a tire, and mixology. “Honestly, I never relax, and I’m excited about being able to relax for the first time in ten years.”

Honestly, I never relax, and I’m excited about being able to relax for the first time in ten years.
— Taylor Swift

As Swift relaxed at childhood friends Maack and Benjamin LaManna’s nuptials, the question of love came up.

“You know, I went out on a normal amount of dates in my early 20s, and I got absolutely slaughtered for it,” she said. “And it took a lot of hard work and altering my decision-making. I didn’t date for two and a half years.”

Kanye West Explains His Expressive Nature, and His Issue With Taylor Swift

Swift is currently in a relationship with Calvin Harris, and they are smitten with each other, as seen in uploads to each other’s Instagram page.

“I’m just taking things as they come,” the “Bad Blood” singer said. “I’m in a magical relationship right now. And of course I want it to be ours, and low-key … this is the one thing that’s been mine about my personal life.”