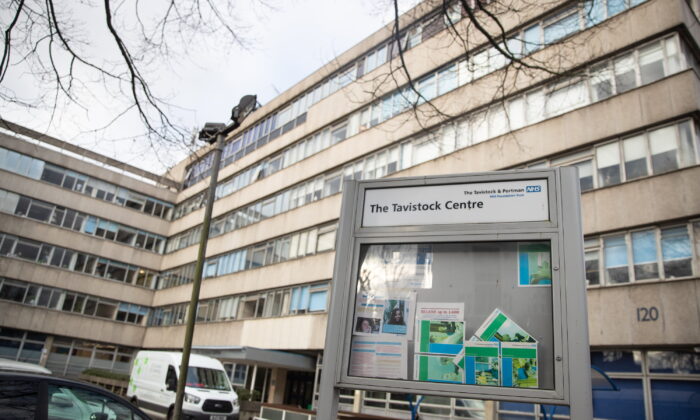 The Tavistock Centre in London in an undated file photo. (Aaron Chown/PA)
By Owen Evans

A transgender clinic for minors that has been accused of rushing vulnerable children into treatment is to close, though a rise in gender dysphoria cases means that the NHS is moving to a new model with “strong links to mental health services.”

The Tavistock Centre in London, which runs England’s only NHS gender identity development service (GIDS), is to close by next spring after an official report in February found issues around safety (pdf).

There has been a considerable rise in gender dysphoria cases the NHS said. In 2021/22 there were over 5,000 referrals to the clinic, which compares to just under 250 referrals in 2011/12.

The interim Cass Review on Tavistock GIDS was carried out by top British paediatrician and past president of the Royal College of Paediatrics and Child Health, Dr. Hilary Cass.

At the time, Cass expressed deep concerns about the affirmative model, concluding that primary and secondary care staff have had to adopt an “unquestioning affirmative approach.”

“It has become increasingly clear that a single specialist provider model is not a safe or viable long-term option in view of concerns about lack of peer review and the ability to respond to the increasing demand,” she said.

“Primary and secondary care staff have told us that they feel under pressure to adopt an unquestioning affirmative approach and that this is at odds with the standard process of clinical assessment and diagnosis that they have been trained to undertake in all other clinical encounters,” added Cass.

NHS England will now move young people who believe they have gender dysphoria into regional centres which will take a more “holistic” approach with mental health support.

“Additionally, a significant number of children are also presenting with neurodiversity and other mental health needs and risky behaviours which requires careful consideration and needs to be better understood,” it added.

The new regional centres should be specialised to manage the caseload of children requiring support around their gender identity, the NHS said. They should be experienced providers of tertiary paediatric care to ensure a focus on child health and development, with strong links to mental health services.

One site will be based in London and will be led by a partnership between Great Ormond Street Hospital and Evelina London Children’s Hospital, with South London and Maudsley NHS Foundation Trust providing specialist mental health support for children and young people.

The other will be based in the northwest, led by a partnership between Alder Hey Children’s NHS Foundation Trust and the Royal Manchester Children’s Hospital, where both trusts also provide specialist children’s mental health services.

“A comprehensive patient and family-centred service and package of care is needed to ensure children and young people who are questioning their gender identity or experiencing gender dysphoria get on the right pathway for them as an individual,” wrote Cass in a July 19 letter to the NHS (pdf).

Also in Cass’s latest advice, she restated her position on the use of puberty blockers in under 16-year-olds: that “there is insufficient evidence currently available for her to make any firm recommendations around their routine use.”

Keira Bell, 23, was given puberty blockers as a teenager after only three hours of consultation at the Tavistock Centre. Initially, her case won a judgement that children under the age of 16 considering gender reassignment were unlikely to be considered mature enough to give informed consent to be prescribed puberty-blocking drugs. However, the Court of Appeal overturned the judgement.

Appleby had concerns about the safety of children, including the high numbers being referred to GIDS, and “a worry that some young children are being actively encouraged to be transgender without effective scrutiny of their circumstances.”

In 2021, the Care Quality Commission released its report (pdf) on the gender identity services offered by the Tavistock and Portman NHS Foundation Trust, giving it an inadequate score, and finding that “staff did not always feel respected, supported, and valued. Some said they felt unable to raise concerns without fear of retribution.”

“We have over 30 years of experience and expertise in this field,” wrote the Tavistock and Portman NHS Foundation Trust in a statement.

“We will work closely with our partners and commissioners to ensure a smooth transition to the new model of delivery. Over the last couple of years, our staff in GIDS have worked tirelessly and under intense scrutiny in a difficult climate, delivering not just high-quality patient care during a pandemic, but an entire service transformation programme,” it added.