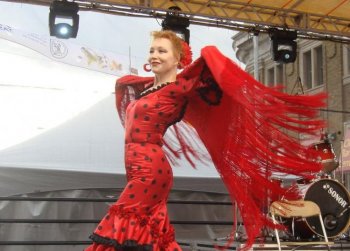 Taste of the Danforth Attracts Over a Million

Since 1994, the three-day festival has attracted tourists from all over Canada, the Unites States, and around the world who want to experience traditional Hellenic cuisine and culture presented by Greek locals.

People from a range of ethnic backgrounds and all walks of life enjoyed the weather, the music, and Greek specialties such as souvlaki, gyros, and baklava. Three stages marked the start and end of the lengthy stretch of the festival from Chester to Jones Ave.

“I look out there and it’s just like when I’m landing in Athens—I look and all I see is the thálassa (Greek for sea), that’s how I felt like. I was looking out and it’s just a sea of people.”

Arkadia made the trip from Regina to bring the festival a taste of the Greek rhythms that they modernize with a catchy beat. It was the band’s seventh time to perform at Taste of the Danforth, but the first for Lentzos’s 13-year-old godson, Chris Dimas, who played the drums.

A mix of the young and elderly cheered on the band.

“It was unexplainable,” said Dimas after the performance. “Getting dark, the light shining in your eyes, and I can see all the people, it’s awesome. . . Very proud to be Greek.”

Street vendors worked non-stop. With crowds waiting in line for up to 40 minutes for specialty gyros, there was no time to relax. Hellenic Home, a seniors’ centre, brought out their booth for the tenth year in a row to serve the Greek pastry desserts baklava and kadiefi.

“Everyone must taste the baklava,” Agrapidis added. Indeed, some people visited the festival just to try out the food.

“It’s really good weather and the food is delicious,” said Mississauga resident Zameera Sayed who came with her friend Monika.

“We heard one of the musicians sing a song about their workday, and it was pretty upbeat and fun, it was a nice change,” said Sayed. The girls learned that in Greece people get paid every other week and then sing a song about it.

Two of the stages offered Spanish dance, top 40 artists, and other local performances. There was something for everyone at the popular festival, which also showcases Asian and Western cuisine.

Freelance flamenco dancers provided a taste of Spain. Three women dressed in traditional farales (flamenco-style dresses) with ruffled skirts were escorted by a guitarist on stage, where they performed with fans and a shawl.

“Toronto is so multicultural; they have the belly dancers here too. . . It’s the Taste of the Danforth, and Danforth has different tastes,” said principal singer Maria Assunta.

Agata Sieron, who came to the festival to promote a Greek restaurant opening in Greek Town, had her eye on something other than the food or the entertainment. “There’s a lot of good-looking guys here,” she said.