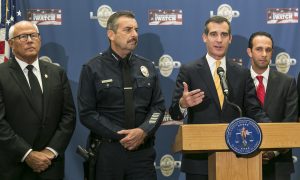 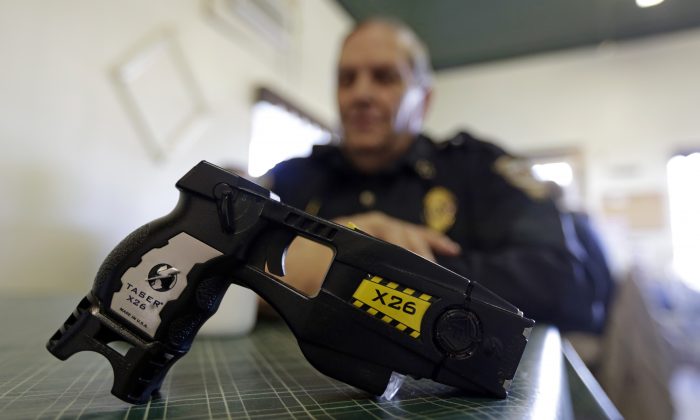 In this Nov. 14, 2013 photo, a Taser X26 is shown as Knightstown Police Chief Danny Baker talks about being shot by the weapon to raise money for his department in Knightstown, Ind. (AP Photo/Michael Conroy)
US

After a taser proved ineffective on a suspect in LA, police shot the man dead
By Genevieve Belmaker
biggersmaller
Print

One of the multiple tools police use to fight crime is a taser, but sometimes it’s just not enough. In rare cases, a suspect is shot and killed.

On Sunday, when the LAPD responded to a burglary in progress in Los Angeles’s notorious Skid Row, a struggle led to the death of a homeless man. Police had tried to taser him, it had no impact, and after he struggled for an officer’s gun he was shot dead. Tasers are one the few non-lethal options the LAPD has.

Tents and cardboard shelters cover the sidewalks of Skid Row, the downtown neighborhood where an estimated 1,700 homeless people live. Many of them struggle with mental illness and addiction.

According to the LAPD, the man (whose name wasn’t released as of Monday) fought with police when they tried to arrest him. They used a taser but dramatic video taken by one bystander shows the man as he fights back, then falls to the ground. Police say that he then “struggled over one of the officer’s handguns” and was shot multiple times. He died at the scene.

The standard law enforcement taser police used on the man, called an X26, is shaped like a handgun but is much bulkier. It uses air cartridges with compressed nitrogen and fires two barbed probes that are attached to conductive wires. The probes dig into the person’s skin and create a circuit that can deliver electrical pulses.

If both probes connect and the weapon is used correctly, the electrical pulses can jam motor and sensory function and cause temporary paralysis.

A taser is considered more effective and less dangerous than other non-lethal options, such as stun guns, pepper spray, or simple blunt force with a weapon like a night stick.

But in the world of the homeless community on skid row, where drug and alcohol abuse are rampant, tasers can face other problems. Like other non-lethal weapons, a taser can be ineffective if the person hit is under the influence of drugs or alcohol.

There has been some public outcry that the homeless man was shot to death. On Monday, LAPD Police Chief Charlie Beck called it an “extreme tragedy” during a press conference.

After the shooting, other police on the scene were seen drawing their batons and warning an angry crowd to step back. Several shouted at the officers, accusing them of going too far.

The violence Sunday had echoes of the August police shooting of 25-year-old Ezell Ford, whose death in a struggle with Los Angeles officers brought demonstrations in the city. Ford was unarmed, but police said he was shot only after reaching for an officer’s gun.

In addition to bystander video of the tasering and shooting, two of the police officers at the scene were wearing body-cameras. There was no word on when or if it would be released. There is a use-of-force investigation currently underway.