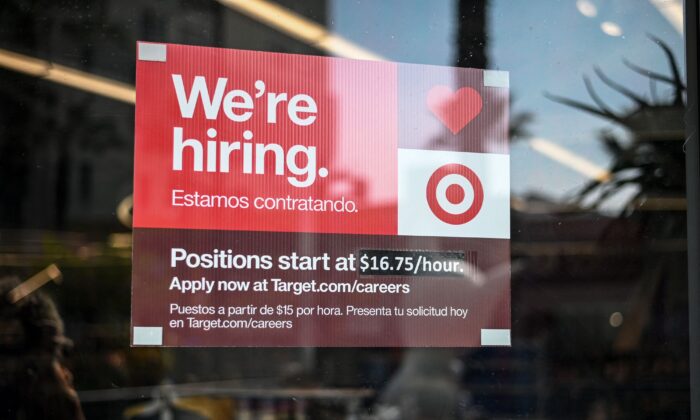 A sign advertising for new employees with an updated starting salary of $16.75 per hour is seen in the window of a Target store in Hollywood, Calif., on Nov. 9, 2021. (Robyn Beck/AFP via Getty Images)
Companies

Target Will No Longer Open Stores on Thanksgiving Day

Target will no longer open their retail outlets on Thanksgiving Day, making permanent what was initially a pandemic-related move for distributing single-day foot traffic over an extended weekend shopping event.

In view of COVID-19 restrictions, retailers last year were forced to start the holiday promotions earlier so that crowds would not gather for last-minute deals on the day. Based on retail sales reports, this year’s holiday shopping has begun earlier than usual.

“What started as a temporary measure driven by the pandemic is now our new standard—one that recognizes our ability to deliver on our guests’ holiday wishes both within and well beyond store hours,” Target CEO Brian Cornell wrote in a note to employees, according to The Associated Press.

“You don’t have to wonder whether this is the last Thanksgiving you’ll spend with family and friends for a while, because Thanksgiving store hours are one thing we won’t ‘get back to’ when the pandemic finally subsides,” he added.

The National Retail Federation, the nation’s largest retail trade group, predicts this year’s sales to reach record levels with growth expected between 8.5 and 10.5 percent, compared to 2020’s growth of 8.2 percent from the previous year.

Another reason for the increase in early sales this year is that shoppers are worried about the persistent supply chain crisis affecting stores across the country and stocking up earlier than usual to prevent critical shortages during the holidays.

Although stores will remain closed, distribution departments and call centers will be running with some staff members.

As online e-commerce platforms like Amazon get more ubiquitous, Target, along with other major retailers, began opening stores on Thanksgiving a decade ago to stay competitive and make the most of the shopping rush after the traditional family dinner. But retailers soon found out that early sales merely took away volume from Black Friday.

When critics blamed corporations for making people work during holidays, some stores ended the practice. Retailers like Nordstorm and Costco remained closed, saying they wanted to respect the holiday.

According to Adobe Digital Economy Index, Thanksgiving is usually a high sales volume day, not for physical retail, but for online sales, trailing just behind Cyber Monday and Black Friday.

According to a Twitter post from Target, the company is hiring 100,000 seasonal store team members and 30,000 new supply chain positions to accommodate the holiday rush.

The company delivered a strong third-quarter performance, with a growth of 12.7 percent in comparable sales.

The decision by Target to remain closed on Thanksgiving could be followed by other retailers.