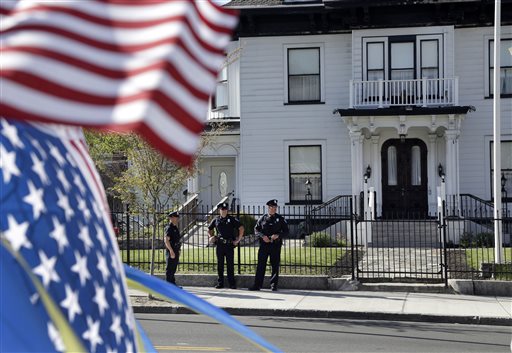 Police keep watch outside Graham, Putnam, and Mahoney Funeral Parlors in Worcester, Mass., Monday, May 6, 2013 where the body of killed Boston Marathon bombing suspect Tamerlan Tsarnaev is being prepared for burial. (AP Photo/Elise Amendola)
US

A Massachusetts funeral director said Monday he has received burial offers from out-of-state cemeteries for the body of a Boston Marathon bombing suspect who was killed in a gun battle with police, even as Tamerlan Tsarnaev’s mother told him she wants the body returned to Russia.

But Worcester funeral home director Peter Stefan said despite the request, he doesn’t think Russia will take Tsarnaev’s body and he is working on other arrangements. He declined to be more specific.

The question of where Tamerlan Tsarnaev will be buried dragged on for another day, and the issue seemed far from resolved.

Stefan said he plans to ask for a burial in the city of Cambridge, where Tsarnaev lived. Cambridge has asked him not to do so.

“The difficult and stressful efforts of the citizens of the City of Cambridge to return to a peaceful life would be adversely impacted by the turmoil, protests, and wide spread media presence at such an interment,” Healy said in a statement Sunday.

Mass. Gov. Deval Patrick told reporters that “this isn’t a state or a federal issue, it’s the family’s issue,” according to the New York Times. “And the family has some options. I assume they will make a decision soon. I hope they do.”

Patrick wouldn’t say if he would oppose Mr. Tsarnaev’s burial in Massachussets. Rep. Edward Markey said he would.

“I think that the body should be controlled by the federal government,” Markey said. “But if the people of Massachusetts do not want that terrorist to be buried on our soil, then it should not be.”

“Funerals are for the living, not the dead,” said Marxhausen, pastor of Zion Lutheran Church in Idaho Springs, Colo. “There are always going to be haters, people that are immature and want to get revenge after death, but they are missing the point of comforting a family.”

If Russia refuses to accept the body, Cambridge may be forced to take it, said Wake Forest University professor Tanya Marsh, an expert in U.S. law on the disposal of human remains.

Massachusetts law requires every community to provide a suitable place to bury its residents, she said. Cambridge’s appeal to the family not to ask it to bury the body is likely a way to set up its defense if the family goes to court to try to force the burial, Marsh said.

Such a case would be unprecedented in Massachusetts, she said. She added that even in a country that’s had its share of notorious accused killers, this kind of opposition to a burial is unheard of and is exposing holes in the law, Marsh said.

“It’s a mess,” she said. “We’re really sort of in uncharted territory.”