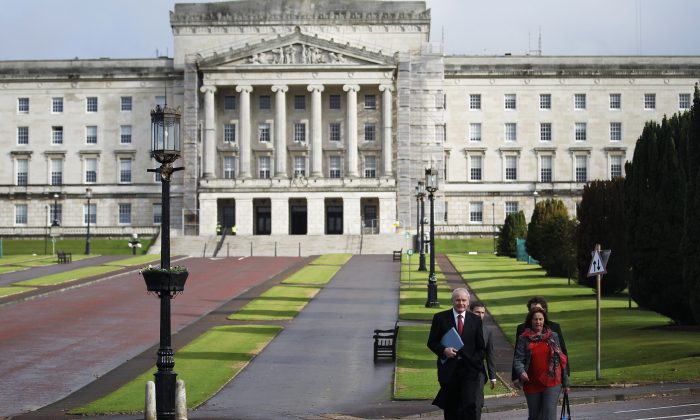 Britain convened the Belfast talks in hopes of narrowing the divisions that threaten to unravel Northern Ireland’s five-party coalition, the central achievement of the 1998 Good Friday peace accord.

At stake is a government of former enemies who are committed to ending a 45-year conflict that has claimed 3,700 lives. But many grass-roots disputes that stir street violence remain unresolved, particularly sectarian parades and the display of British and Irish symbols.

This year the two sides are battling over Northern Ireland’s budget, with Sinn Fein blocking welfare reforms that are already law in Britain. The impasse has caused 87 million pounds ($138 million) in lost money and cuts in government services, with more on the way.

Sinn Fein’s senior figure in the administration, Deputy First Minister Martin McGuinness, said the Democratic Unionists’ absence displayed contempt for others. He described the past two years’ level of cooperation with Protestant leaders as “absolutely appalling.”

Should the talks fail, the Northern Ireland Assembly could be dissolved for early elections and power-sharing would face an uncertain revival. Filling the political void would be resumed “direct rule” from London, the system that prevailed from 1972 through much of the 2000s.