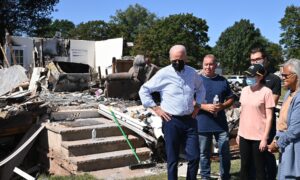 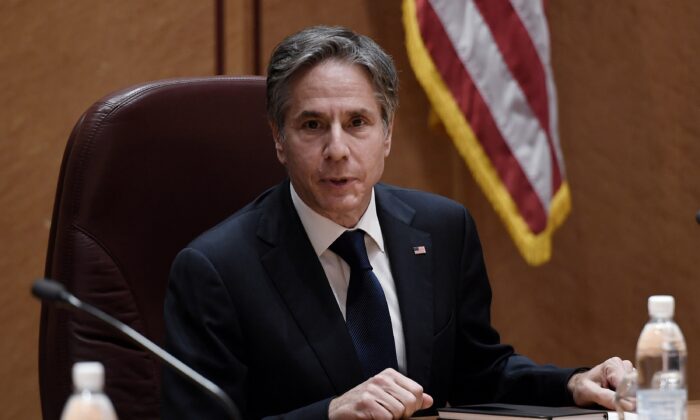 U.S. Secretary of State Antony Blinken attends a meeting with his German counterpart at Ramstein Air Base in Germany on Sept. 8, 2021. (Olivier Douliery/Pool via Reuters)
Afghanistan

Taliban terrorists are continuing to block Americans from leaving an airport in northern Afghanistan, a top U.S. official said Wednesday.

A number of people, including Rep. Michael McCaul (R-Texas), described a hostage situation at the airport in Mazar-i-Sharif this week. U.S. Secretary of State Antony Blinken said Tuesday that the Taliban was preventing Americans from leaving because they lacked proper papers.

“It’s my understanding that the Taliban has not denied exit to anyone holding a valid document,” he said after meeting with officials in Qatar.

A day later, Blinken shifted in tone when speaking about the situation.

“As of now, the Taliban are not permitting the charter flights to depart,” Blinken said after meeting with his German counterpart at Ramstein Air Base in Germany.

“They claim that some of the passengers do not have the required documentation. While there are limits to what we can do without personnel on the ground, without an airport with normal security procedures in place, we are working to do everything in our power to support those flights and to get them off the ground,” he added.

But Blinken, who has said that the United States lacks the ability to vet the passengers on planes leaving or attempting to leave Afghanistan, later said that “some of the groups claiming to have all of the documentations and arrangements locked down, unfortunately, don’t.”

McCaul, the top Republican on the House Foreign Affairs Committee, told The Epoch Times via email, “No matter what the Biden administration tries to claim, we know for a fact there are Americans with proper documents who are trying to leave and have not been able to.”

U.S. troops withdrew from Afghanistan on Aug. 30. Since then, Americans stranded in the country have been without direct assistance from the U.S. government.

Further, a staffer from McCaul’s panel said that the State Department cannot finalize visa requests for Special Immigrant Visa applicants because such applicants require an in-person interview and no U.S. staff members remain in Afghanistan. If the planes are allowed to leave, that means the Afghans who don’t already have a visa will not be able to leave.

Private groups chartered six flights to help Americans and others escape from Mazar-i-Sharif, but those planes still have not taken off.

The State Department is working with non-governmental organizations, advocates, and lawmakers around the clock to “help coordinate their efforts and offer guidance where we can,” Blinken said, adding that the agency is trying to help with clearing the flights to land in third countries.

While Blinken portrayed the United States as assisting in the ongoing efforts to get Americans out of the Taliban-held country, others have said the State Department is actually hindering them.

Three Americans engaged in rescue missions told Fox News that the agency was obstructing the missions. Fox later cited an email obtained from Eric Montalvo, who organized some of the charter flights, that showed the State Department would not provide approval for landing the flights in third countries, nor would the United States let the planes land at U.S. military bases.

A State Department spokesperson told The Epoch Times via email, “As the secretary said, we’re working around the clock with NGOs, with members of Congress and advocacy groups, providing any and all information and doing all we can to clear any roadblocks that they’ve identified to make sure that charter flights carrying Americans or others to whom we have a special responsibility can depart Afghanistan safely.”

“To be clear, we are doing everything we can to facilitate these flights,” the spokesperson said.

Blinken also appeared to respond to the reports.

“The bottom line is this: those flights need to be able to depart. And we will work every day, to make sure that they’re able to do that. We will continue to press the Taliban to allow the charters to leave. And also critically, to open HKIA, the Hamid Karzai International Airport, to the regular-flow civilian aircraft, which can enable the safe and orderly departure of people from Afghanistan,” he said.