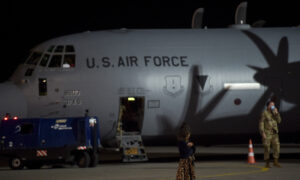 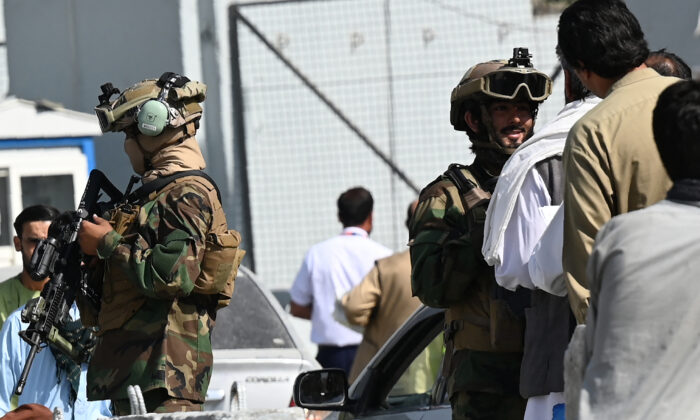 Taliban terrorists stand guard at a checkpoint as airport workers queue to enter to the Kabul International Airport in Kabul on Sept. 4, 2021. (Aamir Qureshi/AFP via Getty Images)
Afghanistan

The Taliban is blocking Americans from leaving Afghanistan because the U.S. citizens don’t have proper credentials, U.S. Secretary of State Antony Blinken claimed on Tuesday.

A top Republican in Congress said Sunday that the Taliban was blocking Americans from leaving an airport in Mazar-i-Sharif in northern Afghanistan.

Marina LeGree, executive director of Ascend, a nonprofit that works in Afghanistan, told AFP that 600-plus Afghans, in addition to 19 Americans, were being prevented from leaving the airport in question.

Blinken acknowledged “a relatively small number of Americans” are trying to leave Mazar-i-Sharif with their families. But he appeared to pin the blame on the Americans, suggesting they lacked proper documents, even as he admitted the State Department cannot verify manifests or documents because the United States no longer has a presence in the Taliban-held country.

“One of the challenges has been that, as we understand it, there are groups of people who are grouped together, some of whom have the appropriate travel documents—an American passport, a green card, a visa—and others do not. And it’s my understanding that the Taliban has not denied exit to anyone holding a valid document. But they have said that those without valid documents at this point can’t leave,” he told reporters in Qatar.

“But because all of these people are grouped together that’s meant that flights have not been allowed to go,” he added. “We are not aware of anyone being held on an aircraft or any hostage-like situation. So we have to work through the different requirements. And that’s exactly what we’re doing.”

U.S. officials engaged with Taliban officials in the hours leading up to Blinken’s remarks and were assured that the terrorist group is still committed to letting Americans who have the proper documents leave.

“They’ve said that they will let people with travel documents freely depart. We will hold them to that,” Blinken said.

The Taliban took over Afghanistan from a U.S.-backed government in mid-August. The United States openly cooperated with the group for 17 days as they held the airport in Kabul and evacuated over 120,000 people from the country, primarily Afghan nationals.

When U.S. troops withdrew on Aug. 30, between 100 and 200 Americans were left behind, breaking a promise that President Joe Biden made to get every American out who wanted to leave.

Approximately 100 Americans remain in Afghanistan, Blinken said, and State Department officials are in direct contact “with virtually all of them.”

Biden administration officials have attempted to portray those who couldn’t get out before U.S. troops withdrew as dual nationals who were torn between leaving and staying, a narrative undercut by the dozens of U.S. primary school students who couldn’t escape before the withdrawal.

Some outside estimates have pegged the number of Americans stranded in Afghanistan as high as 500. Republicans have pressed the administration to provide the full number, but officials have declined because they say the figure is constantly fluctuating as more people leave and some who already left confirm their departures with the State Department.

The agency took credit for the evacuation of the family that exited the country via a land route, but Cory Mills, who said he organized the rescue effort, told Fox News that agency officials did little to help the four people who were able to make it out.

“This is an attempt to save face by the administration for the Americans they left behind,” he said.