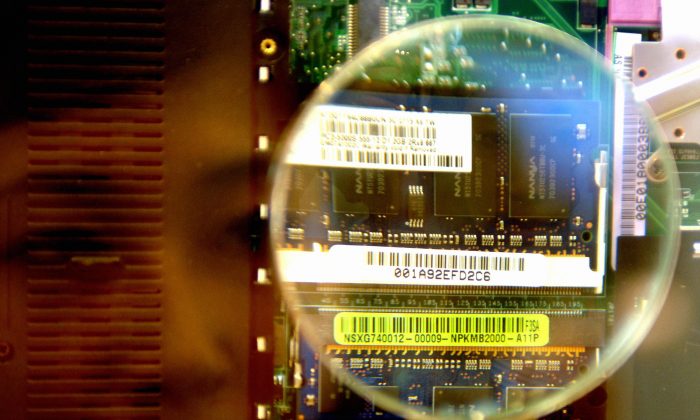 A woman looks through a magnifier to see a 2GB RAM from a notebook during the semi-tech show in Taipei 10 in May 2007. (Sam Yeh/AFP/Getty Images)
Asia & Pacific

Taiwanese Companies Accused of Recruiting Semiconductor Experts for the CCP

In the last three years, hundreds of Taiwanese semiconductor professionals were successfully recruited into working at the two Chinese-funded companies, according to the prosecutors. These professionals were paid an annual salary twice or higher than their original pay.

However, the recruitment effort “seriously undermined” the development of Taiwan’s semiconductor industry, the prosecutors said.

The prosecutors added that it was important to secure Taiwan’s trade secrets in the face of China’s aggressive effort to poach Taiwan’s semiconductor experts.

The raids resulted in the seizure of multiple pieces of evidence, including employment contracts, employee non-disclosure agreements, cellphones, laptops, and bank passbooks, according to the press release.

The four senior executives were accused of violating a Taiwan law governing the relations between Taiwan and China, which prohibits any profit-making enterprise in China from engaging in any business activities in Taiwan without the approval of Taiwanese authorities.

Taiwan’s Ministry of Economic Affairs has also banned China-based entities from establishing semiconductor companies or subsidiaries in Taiwan, according to the press release.

According to Taiwanese media, the unnamed China-based semiconductor was Beijing-based Bitmain Technologies. Additionally, the two companies in Taiwan were set up by Bitmain and its subsidiary CVITEK, which is also based in China’s capital Beijing, without the approval of Taiwan’s authorities.

Bitmain, a chip designer that specializes in cryptocurrency mining, has clear ties to the Chinese Communist Party (CCP). According to the official website of the Haidian District government in China’s capital Beijing, Bitmain was a member of a business alliance that focused on “party building” in 2019.

Additionally, Bitmain has received multiple government subsidies and funding from the Haidian District government in recent years. For example, in 2019, it received a subsidy in corporate research and development.

Taiwanese daily newspaper Liberty Times reported many of the hundreds of Taiwanese semiconductor professionals recruited originated from some of the best-known semiconductor companies on the island, including chip designer MediaTek and Taiwan Semiconductor Manufacturing Company (TSMC), the world’s largest contract chipmaker.

By Wednesday afternoon, the four Taiwanese senior executives have been released after posting bail, according to local media.

Aside from offering Taiwanese tech experts a big pay raise, the Chinese regime tried to infiltrate Taiwan’s tech sectors in a number of other ways, including corporate theft and job-recruitment programs.