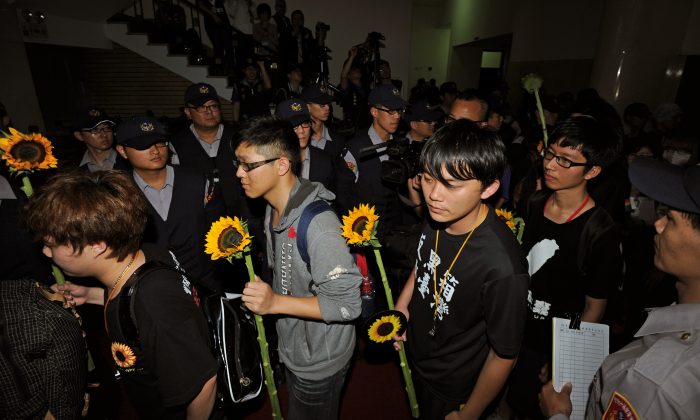 Students protesters walk out from the parliament building after they ended an occupy protest over a contentious trade pact with China, in Taipei on April 10. (SAM YEH/AFP/Getty Images)
China

Taiwan’s student protesters peacefully vacated the parliament building, called the Legislative Yuan, Thursday evening, after occupying it for 24 days in protest against the Taiwanese government’s proposed trade agreement with China, which they derided as a troubling “black-box operation.”

The trade agreement that would allow cross-investment in industries such as financial services, tourism, telecommunications, medical services, and more, was signed last June by Chinese and Taiwanese politicians at a conference in Shanghai. Opponents at the time condemned its lack of transparency and review inside Taiwan.

When a lawmaker with the Nationalist Party, which is in power in Taiwan, attempted on March 17 to rush a review of the pact through Parliament—a necessary step before it can be enacted—the population balked. A mass protest ensued, with a coalition of students and civil groups storming Parliament on March 18.

Student leaders gave speeches before stepping out of the Legislative Yuan at around 6 p.m. Thursday, emphasizing that the Sunflower Student Movement, as they have come to call themselves, will continue and grow bigger.

“Occupying the parliament is just the preface of this movement. In the next chapter, the movement will be through society, turning defense into offense,” said student leader Chen Wei-ting in the speech, according to the livecast by NextTV.

The decision to end occupation of Parliament was made after speaker of the house, Wang Jin-pyng, vowed publicly on Sunday to halt a review of the trade agreement before an oversight bill passes. Wang is known to be a political antagonist of the president, Ma Ying-jeou, even though they are from the same political party.

Wang’s speech led to frustration from his own party, which called him a traitor for the unexpected promise.

Taiwanese President Ma Ying-jeou said he insisted on having the trade pact reviewed in a speed manner, adding that it could be moved through Parliament at the same time as the oversight bill. The Nationalist Party holds a majority in the Legislative Yuan, so a review would effectively make the bill law.

But if the Nationalist Party breaks its promise, it will face stiff resistance, student leaders warned on Thursday night.

“If one day, our achievement and promise were broken again by the ruling party, I’m announcing this now: This movement will turn into a full-scale resistance with a much wider scale of protest actions,” Chen Wei-ting said. “It’s not only a student movement, but was a citizens movement from the beginning.”

Another student leader, Lin Fei-fan also said: “We came here with ideals, and we’re leaving with responsibility. Taiwan is our responsibility. From the government to the parliament of the country, they all belong to the people, and should be led by the people as well.”

The student protesters walked out of the Legislative Yuan holding sunflowers, which have come to symbolize the movement, surrounded by crowds of reporters and other protesters. Crowds had largely dwindled by midnight, with nudging by riot police.

Analysts of Taiwan’s political system said that the Sunflower Movement has been a crucial force for crystallizing Taiwan’s sense of democracy.

“The student movement’s basic appeal got positive response through the occupation, which has completed its honorable mission,” wrote Antonio Chiang, a Taiwanese political commentator and columnist, in an article in Apple Daily, a major newspaper.

“It has deepened democracy in Taiwan. The elder generation should be at ease to give the task to those young generations.”