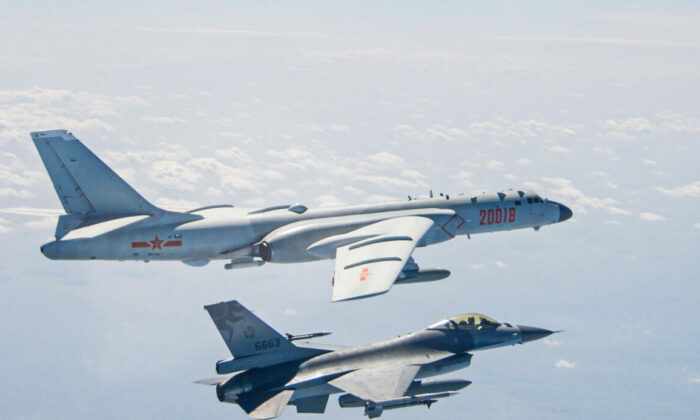 An H-6 bomber of the Chinese army flies near a Taiwan F-16 on Feb. 10, 2020. (Taiwan Ministry of National Defense/Handout via Reuters)
Taiwan 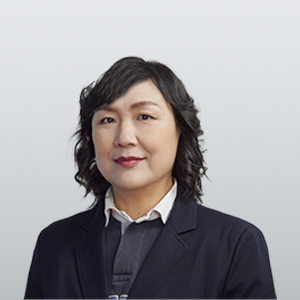 This is the third-largest breach in 2022. Earlier this year, Taiwan reported 39 Chinese military aircraft on Jan. 23 and 30 Chinese aircraft on May 30.

“From what we see recently, China seems to be gearing up its military preparations,” Taiwan Foreign Minister Joseph Wu said in an interview with Newsmax on June 15.

Wu said that Taiwan “sees a very threatening China these days.” He pointed out the Chinese Communist Party’s (CCP) repeated military activities in the Taiwan Strait—the CCP’s naval exercises east of Taiwan for two weeks in early May and multiple air exercises in Taiwan’s airspace.

According to the MND, last year, when the CCP celebrated the anniversary of its takeover of China in 1949, the communist regime sent 38 aircraft to Taiwan’s airspace on Oct. 1, 39 aircraft on Oct. 2, 16 aircraft on Oct. 3, and 56 aircraft on Oct. 4, making it the largest incursion since Sept. 17, 2020, when the MND began to publish real-time updates on the CCP’s military threats.

The CCP has always claimed Taiwan, the self-governing island, as part of China, and its military spokesperson declares that the medium line of the Taiwan Strait does not exist, according to Wu in the interview with Newsmax.

He pointed out that the medium line of the Taiwan Strait has been “safeguarding status quo and peace and stability over this area for years.”

The Biden administration has voiced its commitment to defending Taiwan. President Joe Biden told a CNN town hall event in Baltimore on Oct. 21, 2021, that the United States was committed to defending Taiwan if the island were attacked by China, which was a departure from a long-held U.S. position of “strategic ambiguity.”

At the Shangri-La Dialogue, Asia’s most important security summit held from June 10 to 12, U.S. Secretary of Defense Lloyd Austin criticized the CCP’s military activities near Taiwan as a threat to regional security. He said that the United States adheres to the “one-China” policy but firmly opposes “unilateral changes to the status quo by either side.”

The United States has not recognized Taiwan as an independent nation since 1979. However, Washington maintains a commitment to Taiwan, outlined in the Taiwan Relations Act, in which it guarantees it will provide Taiwan with the military capabilities required to defend itself and maintain its de facto independence.

From May 30 to June 1, U.S. Sen. Tammy Duckworth (D-Ill.) led a delegation to meet with President Tsai Ing-wen, as well as President of the Executive Yuan Su Tseng-chang and Minister of Economic Affairs Wang Mei-hua, for an in-depth meeting on various issues regarding Taiwan-U.S. relations.

Duckworth is a member of the Senate Taiwan Caucus and has repeatedly promoted and co-signed Taiwan-friendly bills in the U.S. Senate.

For example, she introduced the “Strengthen Taiwan’s Security Act of 2022” on May 26, supporting Taiwan and the United States in strengthening coordination in response to Taiwan’s security situation amid the CCP’s provocations while proposing specific measures to strengthen Taiwan’s defense capabilities.

Duckworth and 51 other senators sent a letter to Biden in mid-May, calling for Taiwan to be included in the “Indo-Pacific Economic Framework” (IPEF). She also co-sponsored the “Taiwan Partnership Act” with Sen. John Cornyn (R-Texas) to develop a partnership between the National Guard and Taiwan to maintain sufficient self-defense capability. The initiative has been included in the “2022 Fiscal Year National Defense Authorization Act” (NDAA 2022) through legislation.

U.S. Department of State spokesperson Price stated at a press briefing on June 21 that the Taiwan Strait is “an international waterway.” He said the United States regards “peace and stability in the Taiwan Strait” as “central to the security and the prosperity of the broader Indo-Pacific region.”

Taiwan has also stepped up its self-defense preparations amid the CCP’s escalated military provocations.

You Si-kun, president of Taiwan’s Legislative Yuan, told the Taiwan Overseas Network earlier this month that Taiwan’s supersonic cruise missiles are capable of striking China’s capital Beijing and the Three Gorges Dam, which is the world’s largest power station.

Tsai presided over a military promotion ceremony on June 20, calling on newly promoted generals to beef up Taiwan’s combat readiness.

Wu told Newsmax in an interview on June 15, “The most important thing for us is that we need to be prepared, and we are trying to beef up our defense capabilities to face a situation that China may launch a war against Taiwan.”

Zhong Yuan contributed to this article.