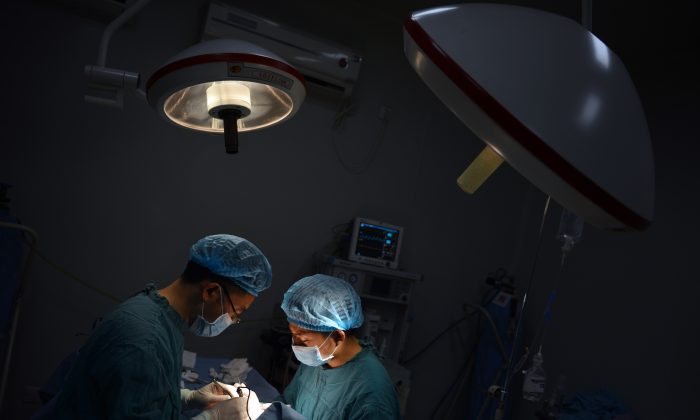 Two doctors perform surgery in southwest China’s Chongqing, on Aug. 9, 2013. A patient received a matching liver and kidney for transplant surgeries within only a month in Tianjin City, according to New Tang Dynasty Television. (Peter Parks/AFP/Getty Images)
China

A Taiwanese patient received a matched liver and a matched kidney within only a month in a hospital in a city in northern China, according to an exclusive interview on Oct. 30 by the New York-based, Chinese-language television network New Tang Dynasty.

The Taiwanese patient with cirrhosis went to China on a tourist visa and arrived at the Tianjin First Center Hospital in Tianjin City in September 2012.

The decision to have two organ transplants was in fact recommended by the surgeon, according to the patient’s family member, who doesn’t want to reveal his name.

“We planned to have a liver transplant originally. [But] the surgeon suggested we transplant both liver and kidney at once instead of transplanting a kidney in the future,” the family member said.

Such a marketing-like suggestion for more transplants is “ridiculous,” and having a matching liver and kidney at the same time is impossible in Taiwan, the NTD report says.

However, finding matching organ sources wasn’t a problem at all in this case, as within one month the patient was informed by the hospital that both matching organs had been found.

The patient and family were given little information about the sources of the organs, the family member indicated. “I didn’t even know what the matching condition was,” he said.

The family member indicated that a special patient area specifically set up for international patients for organ transplant surgery was on the 10th floor of the hospital, and the security for the area was especially strict.

The total organ transplant trip lasted for three months in mainland China and cost the patient and his family about $500,000 in total. However, the patient has suffered infection and stroke, and has remained hospitalized, the family said.

Their one-month waiting time is not considered fast at the hospital, and another patient received an organ transplant within one week, the family member said.

Xue was hospitalized on Dec. 19, 2004, and only nine days later, she was informed by the hospital that a matched kidney was found. She received transplantation surgery conducted by Dr. Han Xiuwu on the evening of Dec. 28.

On the day of the surgery, Xue repeatedly said, “How come it’s so fast. I’m not prepared yet,” Xue’s husband told South magazine, which is sponsored by the Chinese Communist Party Guangdong Province Committee.

The first transplant failed due to the patient’s rejecting the organ. Xue was told to have another kidney transplant on Dec. 30 because a new source was found, but that transplant also failed. Xue passed away on Jan. 30, 2005.

After the persecution of the spiritual practice of Falun Gong began in 1999, the number of transplantations in China rapidly increased. China now performs the second largest number of organ transplants after the United States.

The president of the Third Affiliated Hospital of Sun Yat-Sen University, Chen Guihua, also an expert on liver transplantation, conducted 246 liver transplants in the year 2005, which was one-third of the number performed in China during the previous 12 years, according to South magazine.

China has never fully disclosed the sources of the organs that make possible the boom in transplantation. In November 2012, China’s Vice-Minister of Health Huang Jiefu told the Chinese press that China’s organ transplantation has long relied on executed prisoners.

Several international investigations and reports in recent years have pointed out that there are not enough death penalty prisoners in China to provide the organs needed. The large shortfall is made up by forced harvesting of organs from live prisoners of conscience in China, the reports say.

Groundbreaking research was done by former Canadian Secretary of State David Kilgour and Canadian human rights lawyer David Matas in the report, later book, “Bloody Harvest.” Kilgour and Matas concluded that in the years 2000–2005, the most likely source for the organs for 41,500 transplantation operations was detained Falun Gong practitioners.

After seven years of research, veteran investigative reporter and China expert Ethan Gutmann published the book “The Slaughter: Mass Killings, Organ Harvesting, and China’s Secret Solution to Its Dissident Problem.” The book uses interviews with Falun Gong practitioners who survived the Chinese regime’s labor camps and other evidence to give a fuller picture of forced organ harvesting in China.