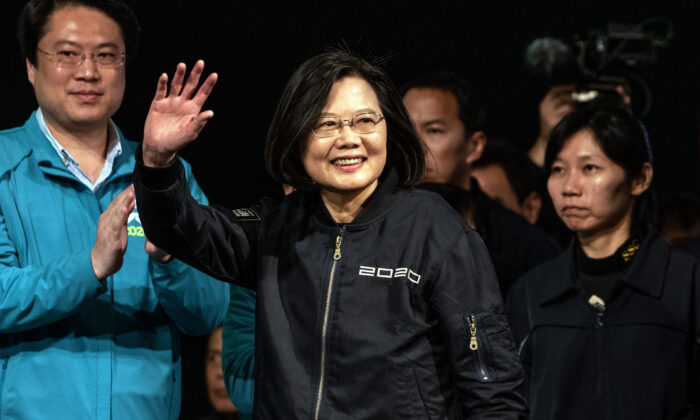 Tsai Ing-Wen waves as she walks on stage to address supporters after being re-elected as President of Taiwan in Taipei, Taiwan on Jan. 11, 2020. (Carl Court/Getty Images)
Thinking About China

TAIPEI, Taiwan—Taiwan President Tsai Ing-wen may not owe her entire record-breaking landslide reelection victory to Hong Kong’s democracy demonstrators, but she owes a good part of it to those courageous young people.

They made her reelection a referendum on China’s leader Xi Jinping’s harsh reaction toward protest in that famed city only 450 miles west of Taiwan.

The Taiwanese had already taken notice of the sudden decline in tourism to their island from the mainland. Last summer, the People’s Republic of China restricted individuals from traveling to Taiwan lest they learn too much about what was happening in Hong Kong. Only groups that could be more closely watched were allowed to go.

Democracy can be catching. (As I type this, it seems to be spreading all the way from Taipei to Tehran.)

You have the sense here the day after the election, as I prepare to leave Taiwan, that possibilities are expanding and positive change is afoot.

Interesting ideas are being bandied about, one of which is the possibility of a free trade agreement between the United States and Taiwan that would include full intellectual property protections.

This would put tremendous pressure on China in their negotiations. They would have to deal with the specter of a free and democratic Taiwan thriving ever more, economically. (Although not quite booming, Taiwan’s GNP is currently rising faster than its free market neighbors Singapore, South Korea, and Hong Kong, whose is, alas, declining for obvious reasons.)

Another possibility is increased military aid from the United States. As with Ukraine, the Trump administration has been considerably more generous with Taiwan than its predecessor was. Sixty-six F-16 Vipers are already in the pipeline at Lockheed Martin for manufacture and shipment to Taiwan, the first scheduled for delivery in 2023.

Will more advanced weaponry now be forthcoming to counter China’s increasingly bellicose actions, which include sailing its latest aircraft carrier through the Taiwan Strait and encircling the island from the air?

It’s certainly in the cards. At the same time, Tsai herself may have to revisit her overly cautious opposition to refugee status for Hong Kong demonstrators who may be facing jail sentences. Many in the public here feel she should. Even her KMT opposition supports it.

Lurking behind all this is ye olde Two China question. In order to appease Mao Zedong and Zhou Enlai and open the door to China, Nixon and Kissinger decreed U.S. policy to be one China only—the People’s Republic. Taiwan was left to twist in the wind, figuratively and literally, with but minor exceptions, for decades.

Then Trump broke the code, as he has done with so many things, and called Tsai to congratulate her when she won her first presidential election in 2016, an act of de facto recognition.

The Taiwanese rejoiced and still do. I saw it with my own eyes in the “rock star” status given our delegation leader Steve Yates, who is associated here with Trump’s decision.

This decision to back democracy on the president’s part was echoed this weekend by his immediate tweet of support—in English and Farsi—for the Iran protestors seeking freedom from their despotic government. (Obama, you may recall, was reluctant to do the same during a previous round of demonstrations.)

The year 2020 has begun well for supporters of democracy. Iran and China have been bastions of totalitarianism for decades. Maybe this will be the year we will see that break apart. Stranger things have happened. Remember—the Berlin Wall fell suddenly.