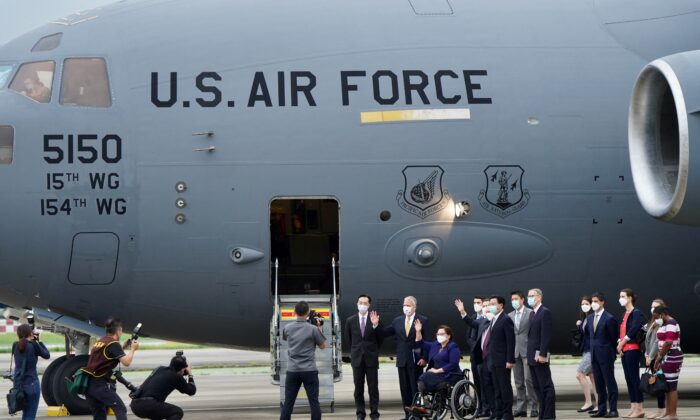 Taiwan Is a Sovereign Democracy, Worth Defending as We Would Our Own

Over the last few days, the European Union, Japan, the United States, Australia, and Britain made statements about increasing support to the Republic of China (Taiwan). While the declarations and resolutions have ostensibly not been coordinated, other than those by Australia, the United Kingdom, and the United States announcing a new AUKUS alliance, they will appear that way from the perspective of China. Regardless, democracies should better coordinate and accelerate their support to Taiwan, in order to fully deter Beijing’s growing belligerence toward the island democracy.

On Sept. 17, Taiwan’s air force was forced to scramble jets to intercept 10 Chinese military aircraft that entered Taiwan’s air defense zone, according to Taiwan’s defense ministry. Chinese reconnaissance and anti-submarine aircraft, which were among the 10 planes, flew into the Bashi Channel near the Philippines.

Taiwan’s defensive flights against these Chinese incursions are a frequent occurrence, as Beijing tests and harasses the island democracy’s air defenses, again and again. The increasing belligerence and unpredictability of the Chinese regime has forced Taiwan to announce, on Sept. 16, an increase of $8.69 billion to its defense spending over the next five years.

Taiwan’s premier explained the increased defense spending as taking the China threat seriously. “The Chinese Communists plot against us constantly,” Su Tseng-chang said. Taiwan’s defense spending “is based on safeguarding national sovereignty and national security. We must not relax. We must have the best preparations so that no war will occur,” he said.

A Sept. 16 statement of support for Taiwan by U.S. and Australian diplomats and defense officials, who also announced increased rotational deployments of U.S. military aircraft to Australia, stated, “The Secretaries and Ministers re-emphasized Taiwan’s important role in the Indo-Pacific region. Both sides stated their intent to strengthen ties with Taiwan, which is a leading democracy and a critical partner for both countries. The principals emphasized their support for Taiwan’s meaningful participation in international organizations, as a member where statehood is not a prerequisite and as an observer or guest where statehood is a prerequisite for membership. The United States and Australia reiterated continued support for a peaceful resolution of cross-Strait issues without resorting to threats or coercion. The American and Australian counterparts expressed their shared commitment to enhance donor coordination with Taiwan in the Pacific.”

Taiwan’s foreign ministry spokeswoman replied, “Our country’s government will, on the existing solid foundation, continue to work closely with the United States, Australia and other like-minded countries to expand Taiwan’s international space, defend the democratic system and shared values.”

Taiwan’s foreign minister had previously said that Taiwan is a “sea fortress” that blocks China’s Pacific expansion. He is absolutely correct. It is for this reason that Taiwan deserves more and quicker Western and Japanese support.

On Sept. 16, Japan’s defense minister said, “What’s happening in Taiwan is directly linked to Japan.” He noted that the island is critical to Japan’s security. “Ninety percent of energy that Japan uses is imported through the areas around Taiwan,” Nobuo Kishi told CNN in an exclusive interview. “What could happen in Taiwan could likely be an issue for Japan, and in that case, Japan will have to take the necessary response to that situation,” he said.

The same day, the European Union formalized its strategy to increase its Indo-Pacific presence and counter China’s expansionism, promising to seek a Taiwan trade deal and to deploy naval ships to the region to keep sea routes open. Diplomats told Reuters that deepening European ties to Taiwan, Australia, and India are meant to limit Beijing’s power. They could include more EU diplomats, investment, and military personnel in the region, including on Australian naval patrols.

The European strategy, delineated in a formal strategy document, said, “Given the importance of a meaningful European naval presence in the Indo-Pacific, the EU will explore ways to ensure enhanced naval deployments by its member states in the region.”

This comes one day after the Sept. 15 announcement of a new Australian, UK, and U.S. (AUKUS) grouping that will initially focus on supplying Australia with nuclear-powered submarines, as well as the earlier Quad (India, Japan, Australia, and United States) grouping also seen as a counter to Beijing’s growing military and political power.

More must be done. Since 2015, when the EU included Taiwan on a list of trade partners and closer bilateral investment coordination, Brussels has not held talks with Taipei. Lithuania recently raised the ire of Beijing when it deepened ties with Taiwan.

On Sept. 16, the European Parliament passed a resolution calling on the EU to “urgently” conduct a trade agreement with Taiwan. The resolution demanded inclusion of Taiwan as a U.N. observer, and stated “grave concern over China’s assertive and expansionist policies in the South China Sea, East China Sea and Taiwan Strait, especially China’s continued military provocation aimed at Taiwan.”

“We call on the European Union to initiate the pre-negotiation work of impact assessment, public consultation and scope definition for a Bilateral Investment Agreement with Taiwan as soon as possible in accordance with the resolutions of the European Parliament,” Taiwan’s Foreign Ministry said. The ministry pointed out that democracies have a special responsibility to coordinate with one another.

“As a like-minded partner of the EU’s with core values such as democracy, freedom, human rights and the rule of law, Taiwan will continue to strengthen cooperation in the supply chain reorganization of semiconductors and other related strategic industries, digital economy, green energy, and post-epidemic economic recovery,” it continued.

The Chinese Communist Party (CCP) General Secretary, Xi Jinping, is taking the flurry of global support for Taiwan seriously. He has in the past threatened to militarily invade Taiwan, and on Sept. 17, he told a meeting of the Shanghai Cooperation Organization (SCO) heads of state in Tajikistan that the group should “absolutely resist external forces to interfere [in] countries in our region at any excuse, and hold the future of our countries’ development and progress firmly in our own hands.”

However, Xi is in a weaker position than the United States and allies, as other than China, the other most populous member of the SCO is India, which is much closer to the West, and a member of the Quad, with the United States, Australia, and Japan. China is getting boxed into a corner over its threats against Taiwan.

Beijing’s weak military position relative to the democracies should be underlined by excluding it from global trade agreements, including the World Trade Organization. The CCP regime is currently seeking to join the Comprehensive and Progressive Agreement for Trans-Pacific Partnership, a large trade pact that includes 11 countries that signed on in 2018. China should be denied entry until it significantly improves its human rights situation, and takes other minimal measures such as recognition of Taiwan’s independence.

Taiwan, as the world’s only Chinese democracy, should take China’s place in international organizations and global trade agreements, which will strengthen democracies and weaken Beijing. A quicker trade agreement with Taiwan, for example, will help the EU boost cooperation with the island on semiconductors, which is much needed given chip shortages that have shut some automobile production lines in Europe.

Japan is not the only U.S. ally that is leaning toward military support of Taiwan in the event of a Chinese invasion. On Sept. 15, the British prime minister refused to rule out British involvement in a war over Taiwan, saying, “The United Kingdom remains determined to defend international law and that is the strong advice we would give to our friends across the world, and the strong advice that we would give to the government in Beijing.”

A Taiwan foreign ministry spokeswoman said that Taiwan was not asking other countries to fight for it. Taiwan welcomed AUKUS “but it doesn’t imply that we are asking the UK to get involved in the conflict across the Taiwan Strait,” she said. “We are responsible for Taiwan’s national security, we are not asking the UK or any other country to fight on our behalf,” she said. “Of course we would appreciate very much the support of the international community and like-minded countries, but that is not an imperative.”

While Taiwan is not asking for our military support, it should do so as democracy on a global level hangs in the balance. Without Taiwan, democracies around the world will be weaker, and Beijing’s dictatorship will be stronger. Taiwan should realize this, and ask for the global military support it requires to hold the line against the CCP’s expanding power.

Likewise, global democracies should, and are, realizing the importance of Taiwan to their own peace and security. Weakness and division in the face of bullying from Beijing will only increase the ability of Beijing to cut our supply lines and international trade routes, thus increasing its power and the scope of its belligerence to countries around the world.

As democracies, we will eventually lose if we allow ourselves to be divided and cut off from the rest of the world and each other. The West and its democratic allies still do not recognize Taiwan as a country, which is absolutely wrong given its democratic system of governance. Legitimate governance arises from broad-based political representation, as is found in Taipei, rather than the thuggery of the CCP.

Given Beijing’s threats against a fellow democracy, the world must re-commit to its democratic principles, rather than its demeaning thirst for ever more trade with China. A possible CCP invasion of Taiwan is thus a forcing function that is compelling the world’s democracies to realize and stand by their principles, rather than their greed. The world must therefore accelerate its recognition of Taiwan as a sovereign and independent democracy, worth defending as we would defend our own.