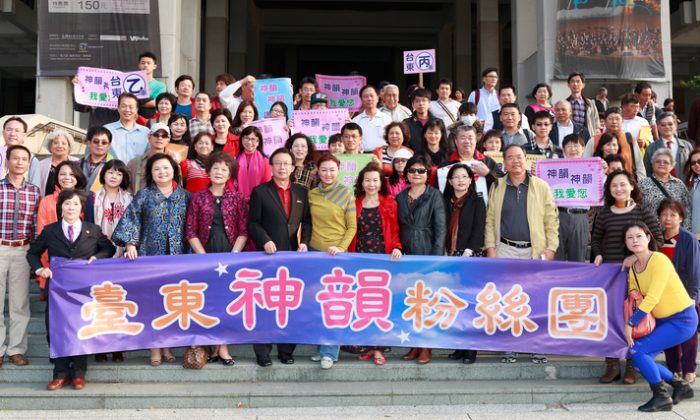 She Yun, based in New York, aims to revitalize 5,000 years of Chinese civilization and bring that to the world through song and dance.

Mayor Chen Jiange, who had already seen Shen Yun before, once again commended the performance’s program: “The performances of all the artists and singers amaze the audience. The layout of the whole program, the incorporation of historical content, and the expressions of the characters all left a strong impression. Many of us have come to see [Shen Yun] several times, and even many years in a row. Seeing the Shen Yun performance is definitely worth the price.”

Mr. Chen spoke about why he was particularly fond of Shen Yun: “Shen Yun’s artists are all extremely devoted and focused, employing all of their energies, as if they have invested their own lives. The way they immerse themselves in the roles they play is really intriguing and also inspires the audience to discover that kind of spirit found in Shen Yun.”

“Such a world-class performance, mobilizing so many artists, is truly tremendous. Every look, every expression, every movement makes one feel as if they really invested a overwhelming amount of hard work and life inside.

“The lighting, the stage display, the live orchestra, as well as the painstaking efforts of the Shen Yun Performing Arts company and the immensity of the program lineup all make one feel that these are characteristics worth learning from.”

“Through the promotion of the show, [we] can subtly let younger individuals understand the essence of our culture as a whole, allowing them to enter the performance’s atmosphere. Within this atmosphere, they can cultivate their interests [in Chinese culture] and come to understand how our early cultural heritage progressed through the ages.”

Mrs. Zheng Chenyun, the mayor’s wife, said she felt extremely happy and excited after watching Shen Yun. She also strongly praised how the performance included so many elements, presenting the universal values of humankind.

“After seeing it, my blood was pulsing! Shen Yun not only demonstrates the strength and beauty of Chinese arts and the essence of humanity, it also presents humankind’s greatest levels of compassion, ethics, and education; One can see all of these principles within this performance.”

Watching Shen Yun for the first time, Mr. Yan Jinbao in charge of Wanyu Bio-tech Company said admiringly, “The performers dance beautifully! The female performers act like goddesses descending down to the world, while the male performers demonstrate an air of dignity and might.”

Gazing in wonder at the first program, Mr. Yan said, “I love this program. The moment when the emperor of the Han Dynasty appeared, I gazed in awe.”

“The program on ‘Ne Zha conquering the dragon king’ is also gorgeous. The dance in combination with the high-tech backdrop is excellent. The performer who acts as Nezha has mastered the art of dance, displaying Ne Zha’s bravery and might.”

Shen Yun has been regarded as a feast for the eyes and ears. Mr. Yan said Shen Yun is a first-class performance, each of its programs being so gorgeous as to delight and relax the audience.

Looking at the beautiful world presented in the performance, he felt like he was really there, free of care and worries. “Watching Shen Yun weekly would transport me to that world,” he said sincerely.

Asked how he would introduce Shen Yun, he replied, “I love Shen Yun. Shen Yun is gorgeous!”

Chen Yuansong, president of the Mind Farm Center for Individuals with Mental Disabilities, toured from Taidong to Kaohsiung for the Shen Yun performance along with his family, many friends, and three foreign exchange students.

Deeply impressed with the magnificent performance, Mr. Chen said, “Such a show, for those watching it for the first time, will be very touching, for its overall backdrop and stage arrangement and that kind of passion and sincerity, displayed onstage by performers.”

Mr. Chen said, “Chinese civilization spans 5,000 years; each dynasty, each ethnicity would be revived, their culture being passed on. It’s never something easy!”

“There are enthusiastic persons who devote their efforts to pass on cultures, particularly the Chinese culture, a culture of great profundity, via art and performing arts. This is what touches us,” he said.

Mr. Chen highly recommended Shen Yun. Its live orchestral performance featuring Western and Eastern instruments has reached a high level of art, not to mention the delicate Shen Yun costumes whose beauty is beyond any description, he said.

Being able to experience such a world-class feast of arts, Mr. Chen said, “No matter how far the distance is, it is quite worth it.”