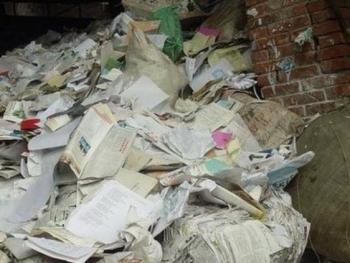 Bathroom tissues made from recycled paper have fluorescent agents and other chemicals added to make tissue whiter and softer. Industry experts say that persistent skin exposure to such substances can lead to cancer. (Internet Photo)
China

A recent article in Ocean Magazine carried a story about a lady last-named Huang. She conducted tests on a particular brand of tissue after feeling itchy from using it. “I felt itchy and uncomfortable after using it. So I had doubts about the sanitation conditions of the paper.” said Ms. Huang.

“I burned a piece of tissue on a white plate and I was surprised by what I saw – it turned into black ash and left a layer of a greasy and sticky thing on the plate which could not be washed away.” Huang added.

According to Zhang Fenning, head of the Golden Woodpecker, a Beijing-based company specialized in waste paper recycling, “the greasy yellow substance left from burning of toilet paper likely came from some chemicals on the list.”

Mr. Zhang said, "There is a considerable amount of toilet paper on the market that is made from recycled paper. Some manufacturers use substandard recycled paper, and then add fluorescent agents and other chemicals to make them whiter – this is already an open secret within the industry."

Tissue made from 100% original wood pulp is actually quite white without added chemicals. As wood pulp is expensive, some manufacturers in China add bamboo pulp which turns the paper yellowish. Quality recycled paper can also be used to make safe tissue, but it requires advanced technology that many small and medium sized manufacturers do not have.

Staff at the Paper Production Research Institute in Guangdong Province held that "if the toilet paper [burned in experiment was] made of recycled paper, it could have been that the ink [in the recycled paper] was not handled correctly. Also, fluorescent whitening agents are prohibited, but there are currently no regulations on the other chemical additives."

A report from Weike Cancer Research Institute in Beijing stated that constant skin exposure to chemicals like fluorescent brighteners can lead to cancer.

A Guangzhou Daily reporter recently visited a local paper whole sale market. Among the bathroom tissue samples in the display, most of them were labeled as being made of 100% wood pulp from paper mills in Guangdong Province. The reporter was told that the gray-looking paper samples are also from wood pulp but without addition of whiteners.

In a small paper mill named Qiang Guang in the Shazhou Industry Park of Dongwan, an important industrial city located in the Pearl River Delta, the reporter found piles of bathroom tissue rolls sitting on the ground. From production and packaging, there are only two machines in the workshop with 4-5 operators. There is no any sanitation or disinfection measures implemented.

Although regulatory authority claimed that reported bathroom tissue problem was due to ink contamination, after the multiple incidents of tainted milk powders, poisonous eggs and beans, toxic toys as well as deteriorated vaccines, consumer confidence in China tumbled. Doubts remain among consumers.