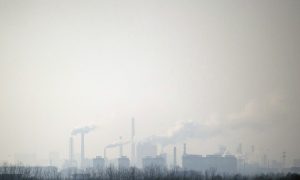 Pollution Makes a Village of Widows in China
0

Looking for Used Clothes in China? Check out the Morgue
0 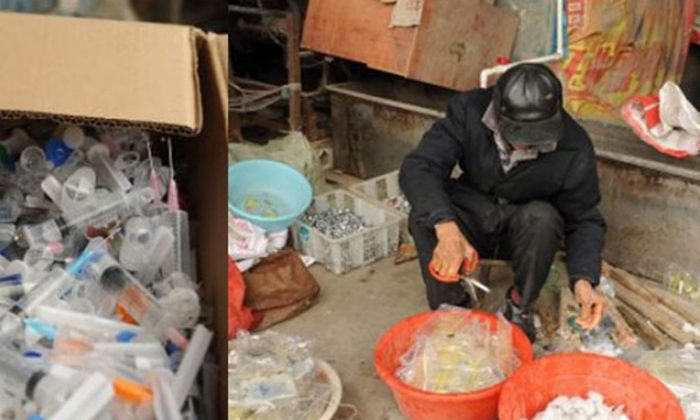 Syringes, Underwear, and the Business of Recyling in China

In China, many make their living by procuring and re-purposing trash. Not all of it is actually safe, especially when the trash in question comes in the form of spent hospital goods or used underwear.

The unclean and potentially disease-ridden materials are cheaply re-sold to manufacturers, who turn them into everyday consumption goods such as quilts, plastic semi-finished products, or children’s stuffed animals.

According to a March 30 report by Chinese magazine Caijing, an illegal recycling center in the city of Shaoyang, Hunan Province, manufactures plastic granules from used syringes and infusion bags. Those running the facility purchased their supplies from hospitals on a monthly basis.

Granules made from the used medical items would then be sold to become a wide range of plastic products—plastic bags, boards, toys, basins, and beverage caps.

The untreated or poorly treated plastic from one-time-use hospital supplies can contain harmful bacteria, as well as viral, toxic, or even radioactive agents.

Illegal recycling shops obtained their materials from sanitation workers, who in turn get them from hospital staff. Prior to that, Caijing reported that used needles and syringes could fetch 1.2 yuan (about 19 cents) a pound and infusion bags 1.6 yuan a pound from Shaoyang medical institutions, which sold their used supplies rather than go through the complications posed by proper disposal.

An anonymous source familiar with the plastic industry in Shaoyang told Caijing that a ton of illicit plastic granules sold for an average of 4,000 yuan (about $645).

Last October, 30 tons of plastic waste was being processed daily in the city of Jinan, capital of Shandong Province.

A reporter from Qilu Web, a Chinese state-run news website, visited a recycling shop in Shandong this March and found that local villagers had purchased used infusion bottles from nearby hospitals in bulk. In the resulting stockpile, bottles were often still labelled with patients’ names and hospital bed numbers.

The bottles were given some rudimentary rinsing and then resold to pharmaceutical companies or to glass firms.

Aside from hospital plastic, used textiles are another hazard in the recycled goods market. Used hospital bed sheets, bandages, or even underwear can be turned into new products like blankets or mattresses.

Villagers in North China’s Hebei Province would used underwear and socks collected from charities to spin into quilts and stuffed animals, as reported by China’s Oriental Daily in 2014.

This April, the public security bureau in Yunnan Province raided five shops in Kunming, the provincial capital. The police seized 592 beds, 500 baby cribs, about six tons of materials, and five sets of industrial equipment used in the illegal production, according to Spring City Evening News, a Chinese paper.

In 2012, the state-run Xinhua reported that their journalists discovered “contaminated recycled cotton” made from materials used in hospitals and mortuaries.

The used cotton is bleached to conceal any discoloring.

Li Tianhua, who ran one of the recycling shops, came to Kunming three years ago, Spring Evening News reported. Last year, when his shop was raided, Li was only a worker. When asked why he did not find a legal job, Li said “You earn nothing being a worker. This is very profitable.”

Li’s 64-year-old father became a victim of his own son’s products when he used a quilt that came from his shop. After a month of use, Li’s father suffered from skin disorders.

In 2013, local state-run media in northeast China’s Heilongjiang Province reported that police raided a shop that purchased used clothes, bed sheets, and gauze bandage rolls from hospitals. The textiles would then be crushed and used to produce cotton fibers for sale to nearby factories.