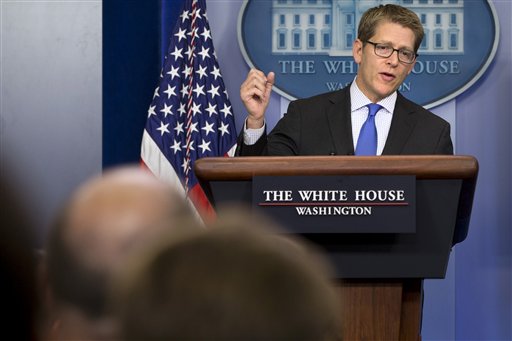 White House press secretary Jay Carney answers questions about Syria and chemical weapons during his daily news briefing at the White House in Washington, Tuesday, Aug. 27, 2013. The U.S. was expected to make public a more formal determination of chemical weapons use on Tuesday, however Carney stated that the president did not have a decision made about the response to announce at this time. (AP Photo/Jacquelyn Martin)
US

When it comes to Syria, the Obama administration is sure about one thing: President Bashar Assad’s government must be punished. The administration concluded on Wednesday that Syria used deadly chemical weapons, possibly including sarin gas, to kill hundreds of Syrians on Aug. 21.

The United States and allies are accusing Assad of crossing the line, which President Barack Obama said would have “enormous consequences.” That’s now expected to trigger a military strike, limited in time and scope, with the goal of downgrading and weakening Assad, but not toppling him or destroying his forces.

Richard Haass, president of the Council on Foreign Relations, says that a military intervention would aim to “reinforce the global norm” when it comes to weapons of mass destruction.

It would also “back up the so-called red line to underscore that when the United States says something, it crosses a red line, that if someone nonetheless goes ahead, it would prove to be a costly decision,” Haass said in a media call on the situation in Syria.

But while the United States is likely to enforce the red line it has drawn on the use of weapons of mass destruction (WMD), it is unlikely to engage in a long-term conflict.

“I don’t believe the administration is going to use this as a way to get involved as a protagonist in the conflict within Syria. … The United States is simply trying to exact a cost for what was done,” Haass said.

According to international terrorism expert Max Abrahms, the military intervention “will be a restrained response by the West.”

“It’s in order to preserve the international taboo over using WMDs.”

The United Nations envoy to Syria, Lakhdar Brahimi, said Wednesday that evidence of a “substance” that may have killed more than 1,000 people was found. The announcement comes as the United States prepares a classified intelligence report for certain members on Congress, laying out the case against Assad. An unclassified version is to be made public.

“It is a very strong normative case for intervention that is hard to overlook,” said Abrahms, assistant professor of public policy at Northeastern University.

According to Abrahms, while many people remember the 2003 Iraq war, the previous one of 1990 is actually a more fitting analogy, since it was a matter of striking back against major normative violations.

Another element in Syria now is that there is currently no viable alternative to the Assad regime, as indicated by reports of major infighting between different elements of the highly heterogeneous opposition.

“A point that isn’t emphasized enough is that the opposition against Assad consists mainly of al-Qaeda forces,” Abrahms said, mentioning the extremist Al-Nusra as the thrust of the opposition. “They are stronger than the Free Syrian Army.”

The Free Syrian Army has fought Bashar al-Assad’s forces since the beginning of the conflict, which started in March 2011 and has killed more than 100,000 people.

U.S.-led strikes are expected not to target the chemical stockpiles themselves, risking their release, but instead to target Assad’s ability to command and control military forces.

Gen. Martin Dempsey told Congress that lethal force would be used “to strike targets that enable the regime to conduct military operations, proliferate advanced weapons, and defend itself.”

At a minimum, Western forces are expected to strike targets that symbolize Assad’s military and political might: military and national police headquarters, including the Defense Ministry; the Syrian military’s general staff; and the four-brigade Republican Guard that is in charge of protecting Damascus, Assad’s seat of power. Assad’s ruling Ba’ath Party headquarters could be targeted, too.

Obama has ruled out putting troops on the ground in Syria, and because of Assad’s extensive air defense systems, officials believe it is too risky at least initially to deploy fighter aircraft or even low-flying drones that could be shot down.

Syria, which sits on one of the world’s largest stockpiles of chemical weapons, has denied the charges. Moreover, Syria’s U.N. ambassador, Bashar Ja’afari, is demanding that United Nations experts investigate three alleged chemical weapons attacks against Syrian soldiers. He said the attacks occurred on Aug. 22, 24, and 25 in three suburbs of the Syrian capital and dozens of soldiers are being treated for inhaling nerve gas.

Britain proposed a draft resolution to the U.N. Security Council Wednesday that would authorize the use of military force against Syria. So far the five permanent members of the Security Council have been unable to reach an agreement on the resolution, which—if it were to be put to a vote—would almost certainly be vetoed by Russia and China.

Britain’s Foreign Secretary William Hague said on Wednesday that the world will still have a responsibility to stop the bloodshed in Syria, even if there is no agreement at the U.N.

The Obama administration said earlier Wednesday that it would take action against the Syrian government even without the backing of allies or the United Nations, because diplomatic paralysis must not prevent a response to the chemical weapons attack.