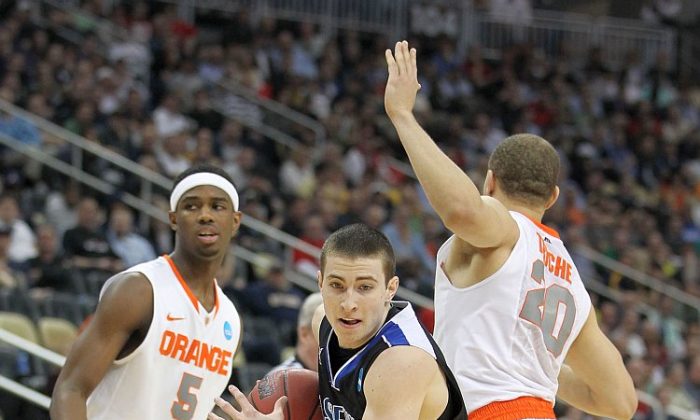 Syracuse Survives Scare, Advances to Round of 32

The Syracuse Orange (32–2) rallied from a halftime deficit to beat the UNC-Asheville Bulldogs (24–10) 72–65 Thursday afternoon in Pittsburgh.

“In the second half I asked the two guys sitting next to me [Scoop Jardine and Kris Joseph] to step it up. They both did, and that turned the game around,” said Syracuse coach Jim Boeheim, according to the NCAA’s website.

Jardine scored 7 of Syracuse’s first 11 points of the second half and finished with 11 points and 7 assists, while Joseph scored 10 of his 12 after halftime and added a team-high 8 rebounds.

The game was far from ideal for Syracuse, who were without the services of center and Big East Conference Defensive Player of the Year Fab Melo. Boeheim insisted the problems weren’t with his centers though. “The fact that this game was close had nothing to do with the center position,” he said.

The Orange trailed through much of the first half and went in to the locker room at the half down 34–30. Surely the thought of being the first top seed ever to lose to a No. 16 seed entered their minds, or at least Boeheim’s.

Boeheim was on the Syracuse sidelines 21 years ago, when his second-seeded Orange became the first team ever to lose to a No. 15 seed, courtesy of Richmond, in a 73–69 loss.

This year was different though, as Syracuse went on a 19–9 run early in the second half to take a 52–48 lead with 8:34 left. They wouldn’t trail again.

UNC-Asheville made one final run to tie the game at 54–54, with 6:42 left on a jumper by Jaron Lane. The Bulldogs did this despite guard Matt Dickey’s 1-of-13 shooting day. Dickey, the Big South Conference Player of the Year this season, finished with a season-low five points on the day and missed eight of his nine attempts from 3-point land.

Syracuse went back ahead and never trailed again, though there was a little controversy before it all ended.

Ahead 62–58 with 1:20 left, the Bulldogs fouled Scoop Jardine to put him on the line for a one-and-one opportunity. After missing the front end of it, UNC-Asheville guard J.P. Primm was called for a lane violation, after running in for the rebound from beyond the 3-point line before the ball had hit the rim.

The little-known rule had the crowd up in arms, especially after Jardine made the most of his second opportunity by hitting two free throws.

Then, after the Bulldogs cut the lead to 64–61 with less than a minute remaining, they pressured the inbounds player into a bad pass that looked like it hit off Syracuse guard Brandon Triche before going out of bounds.

Triche appeared to collide with a UNC-Asheville player right when it went off his hands. However, the referees ruled, right in front of the Bulldogs bench, that it went off UNC-Asheville instead, and Syracuse got the ball back.

Syracuse will now play Kansas State on Saturday in the round of 32.