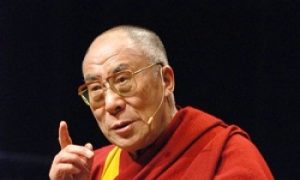 Cyclist Rides for Rights Ahead of Games
0 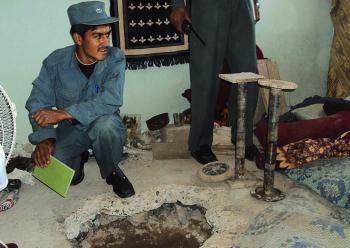 BAD BREAK: An Afghan policeman sits next to the entrance of the tunnel in room number 7 of the Political Prisoners section through which Taliban fighters escaped in an audacious jailbreak in Kandahar city on April 25. The government admitted it was a security disaster in the prison, the second largest break in three years. (STR/Getty Images)
World

By Joshua Philipp
Print
The Taliban prison escape on April 25 served a tough blow to the Afghan government, with the nearly 500 escaped inmates compounding a history of poor security at the Saraposa prison in Kandahar, Afghanistan.

A stigma hangs over the prison run by Afghanistan’s Ministry of Justice. It is a place that “has in recent years been chronically vulnerable and a symbol of the [Afghan] government’s ineffectiveness,” stated Army Brig. Gen. Mark Martins in a Feb. 10 Department of Defense video conference, according to the Pentagon transcript.

The area was known for corruption. “Assassinations of investigators, bribery of prosecutors, intimidation of justices, and attacks upon witnesses have corrupted the system and obscured both evidence and law,” Martins said.

Its poor standing was totally shattered by a 2008 attack in broad daylight that freed up to 900 inmates, including almost 390 Taliban prisoners. Among them were high-ranking field commanders in charge of organizing suicide attacks, according to a report from the Refugee Documentation Centre, through the United Nations High Commissioner for Refugees.

Mending the tarnished image of Saraposa prison and the surrounding area became a focus over the years. Barracks were set up for guards to be on station 24 hours a day, seven days a week. Western trainers and advisers were assigned there, and coalition forces nearby were on-call with Afghan National Police.

The area was placed under a rule-of-law green zone secured by “projecting criminal justice, as well as mediation and civil-dispute resolution, to outlying districts,” Martins said.

Three years later, efforts were finally beginning to pay off. On Feb. 10, Martins stated firmly, that Saraposa “has now become a hard-won symbol of government strength now under the rule of law.”

He added that the prison set a model “we’re seeking to help replicate in other areas around Afghanistan.”

What they did not count on, however, was the Taliban spending five months digging a 1,000 foot-long tunnel and popping up right in the middle of the prison’s political wing.

Afghanistan’s justice minister, Abibullah Ghalab, stated the escape was likely assisted by guards or officials inside the jail, reported Voice of America.

Freed prisoner Mohammad Abdullah told the AP in a phone interview, “There were four or five of us who knew that our friends were digging a tunnel from the outside.” He and others were provided with keys to free prisoners from their cells, who were then led in groups of four of five to the tunnel.

Taliban spokesman Zabihullah Mujahid claimed on the Voice of Jihad website that 541 “Mujahideen inmates” were freed from the prison through “successful tactical operations.” After detailing the heightened security at the prison, Mujahid went on praising the escape.

Although 65 of the nearly 500 prisoners were recaptured, for coalition forces the latest incident was a non-violent repeat of a political blow that took nearly three years to mend.