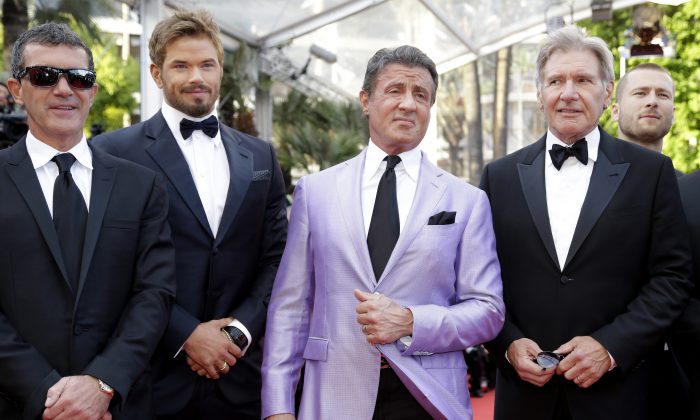 From left, actor Antonio Banderas, Kellen Lutz, Sylvester Stallone, and Harrison Ford, the cast of The Expendables 3, pose on the red carpet as they arrive for the screening of The Homesman at the 67th international film festival, Cannes, southern France, Sunday, May 18, 2014. (AP Photo/Thibault Camus)
Social Media

Sylvester Stallone has not died in a snowboarding accident, but a death hoax is claiming the actor has passed.

The hoax claims Stallone, 67, died in an accident while snowboarding. It’s unclear where the death hoax originated, but it may have been spread by a “RIP Sylvester Stallone” Facebook page.

Global Associated News–a website that specializes in celebrity death hoaxes–appears to have been the cause.

“The actor & novice snowboarder was vacationing at the Zermatt ski resort in Zermatt, Switzerland with family and friends. Witnesses indicate that Sylvester Stallone lost control of his snowboard and struck a tree at a high rate of speed,” it says.

The website has a disclaimer at the bottom, saying it’s not real.

“About this web site. FAKE… THIS STORY IS 100% FAKE! this is an entertainment website, and this is a totally fake article based on zero truth and is a complete work of fiction for entertainment purposes! this story was dynamically generated using a generic ‘template’ and is not factual. Any reference to specific individuals has been 100% fabricated by web site visitors who have created fake stories by entering a name into a blank ‘non-specific’ template for the purpose of entertainment,” the description for the fake story says.