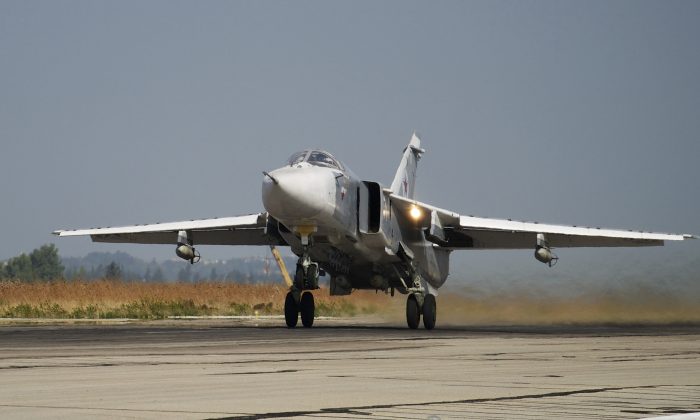 A Russian Su-24 takes off on a combat mission at Hemeimeem airbase in Syria on Oct. 22, 2015. (Vladimir Isachenkov/AP Photo)
By Jack Phillips

The jets, identified as two SU-27 and two SU-24 fighters, flew over Swedish airspace near Gotland Island, according to the Swedish Armed Forces. The incident occurred earlier on Wednesday.

“With the current situation as backdrop, we take this incident very seriously. Russia’s conduct is unprofessional and irresponsible,” Swedish Air Force chief Carl-Johan Edstrom said in a statement.

Sweden’s military scrambled its jets, which took photos of the Russian planes, according to the statement.

“This demonstrates that our readiness is good,” Edstrom said. “We were on-site to secure the territorial integrity and Sweden’s borders. We have complete control of the situation.”

Russia is believed to be using both the SU-24 and SU-27 planes in a bid to achieve air superiority over Ukraine.

Other details about the incident were not made available. Russia has not publicly commented on the alleged airspace violation over Swedish territory.

“The Russian violation of Swedish airspace is of course completely unacceptable,” Defence Minister Peter Hultqvist told the TT news outlet. “It will lead to a firm diplomatic response from Sweden. Swedish sovereignty and territory must always be respected.”

Several days before, Swedish officials confirmed they would send military aid, including 5,000 anti-tank weapons to Ukraine. It’s the first time that Sweden has sent weapons to a country at war since 1939—when Sweden sent weapons to Finland after the Soviet Union invaded during the Winter War, analysts noted.

Finland also said it would send military rifles and ammunition to Ukraine’s military, according to reports.

Both Sweden and Finland, which are members of the European Union, do not belong to NATO, although they are close NATO partners. Since Russia began its invasion of Ukraine in late February, several Swedish politicians publicly mused joining the security organization, which would likely further fray ties with Moscow.

“Anything is possible at the moment and the signal from NATO countries is that a membership application can be processed in a very short time-span,” Zebulon Carlander, defense analyst with the Society and Defense organization in Sweden, told the AFP news agency this week.

Rihards Kols, who is in charge of the foreign affairs committee of Latvia’s Parliament, told the Financial Times: “Their membership would only improve regional security and the ability to deter the aggressor. Whenever I met my Finnish and Swedish colleagues I always ask: ‘When are you joining NATO?’”

However, Russia’s Foreign Ministry last week said that Sweden and Finland could face “serious military and political repercussions” should they join NATO.