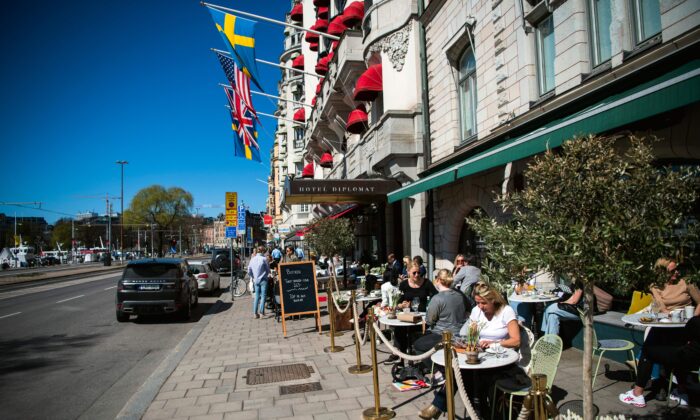 People have lunch at a restaurant in Stockholm, Sweden, on April 22, 2020. (Jonathan Nackstrand/AFP via Getty Images)
WORLD

Sweden Announces It Will Remove Most Remaining COVID-19 Restrictions

Sweden announced it will remove most of its remaining COVID-19 restrictions starting this month, according to a news release on Tuesday.

An announcement from the Swedish government said that restrictions on public venues such as restaurants, theaters, and stadiums will be removed on Sept. 29.

As most adults are vaccinated, Sweden has started to ease some restrictions during a summer lull in the pandemic. Deaths from COVID-19, the disease caused by the CCP (Chinese Communist Party) virus, have remained low in the country in recent weeks.

Vaccine passports, which are being rolled out in several U.S. cities, France, Italy, Switzerland, Israel, and in other areas, might be mandated in the future for “major public gatherings,” according to the government. Exceptions will be made for children below the age of 16 and for individuals who should not be vaccinated for medical reasons.

“The proposal means that any participation restrictions that may be needed for public gatherings and public events with 15,000 or more participants should not apply if the system of vaccination certificates is used,” said the statement. “This means that the organizer shall not be obliged to limit the number of participants in premises and delimited areas or spaces that the organizer has at its disposal if there are restrictions regarding this.”

Recommendations on “working from home will be removed and a gradual return to the workplace can begin,” the government said. “Those who have symptoms should continue to stay at home and test themselves, and employers should then facilitate homework.”

A few days before, the government announced it would bar travelers from Israel, which has one of the highest COVID-19 vaccination rates in the world, from entering Sweden due to a surge in cases in the country. Sweden also banned the entry of citizens from the United States, Kosovo, Lebanon, Montenegro, and North Macedonia.

According to a news release from the Swedish government, the travel ban affecting Israel, the United States, and the other countries was implemented on Sept. 6.

The sharp increases in CCP (Chinese Communist Party) virus infections are the reason why Israel and the other countries were removed from the travel ban exemption, said Interior Minister Mikael Damberg.

Even though Israel is one of the most vaccinated countries against COVID-19, cases have persistently risen. The small nation’s seven-day average for COVID-19 infections on Monday was over 1,000 per one million people, which is double the rate of numbers seen in the United States and the United Kingdom, says Oxford University’s Our World in Data.

Last month, officials in Israel said that around 60 percent of hospitalized COVID-19 patients in a recent outbreak are fully vaccinated. The most commonly used vaccine in Israel is the two-shot one made by Pfizer-BioNTech, which uses mRNA technology