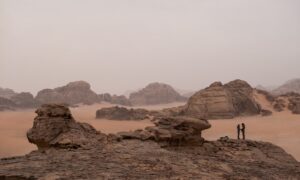 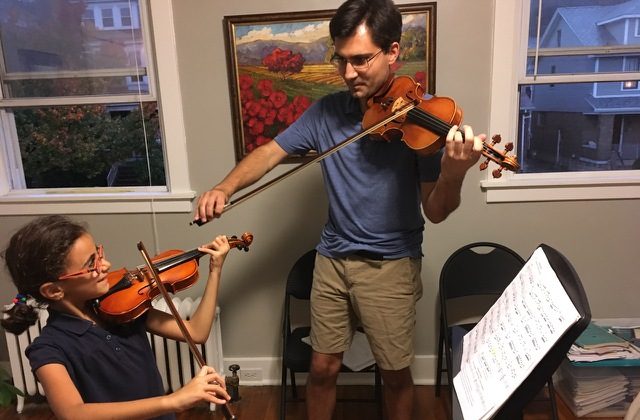 Cradling the violin under his chin, holding the bow just so, a 5-year-old violinist was rendering a lovely Bach minuet—lovely until he got to the last couple of notes. He raced through these, happy to be finished and on to the next thing.

Teacher, violinist, composer, and founder of Musicians With a Mission, Devin Arrington explained to his young pupil that finishing the last note in a hurry was “like leaving the audience with a terrible dessert after a wonderful meal. They’ll remember the terrible dessert,” he said on Sept. 6.

This lesson, one Arrington has had to teach many times, requires youngsters to think from the perspective of other people. It also requires patience.

As a Suzuki instructor of 25 children, Arrington believes that as students learn to play the violin, they are grasping valuable life skills. Arrington adds that other genres of music and other kinds of instruments may enrich students equally well, but he is speaking from the tradition he knows.

In addition to patience, he finds that classical music training helps develop “sensitivity in children—in the best sense of the word. Not sensitive to one’s own feelings, but in listening to others. It helps develop compassion,” he said.

Musicians must be sensitive to changes in tone and pitch, and “in noticing when the musician moves the bow this way and that way, what is the violin saying back?”

Focus and listening intensely are developed skills, as well as attention to detail, in order to create something beautiful.

Shinichi Suzuki and His Goal

Arrington follows the ideas and methods of Shinichi Suzuki, who in the 1960s toured conservatories demonstrating what he’d accomplished with small children on violins. He astounded the world.

Suzuki believed that children could learn the language of music as easily as learning their mother tongue, and he relied on parents to help with encouragement, listening to good music constantly, and seeing to practicing faithfully. These methods mirror those used when the very young learn a language.

Suzuki’s aim, though, was never to produce concert-quality classical musicians, any more than learning a language aims to produce experts at elocution or delivering speeches.

It’s true that his methodology focuses on classical music. His beginning-level books all prepare students to play Bach. By the time they reach the advanced books 9 and 10, students are working on Mozart’s violin concertos. If they can play those, they have achieved the goal of mastery.

Yet the true goal of mastering an instrument is to help prepare “noble human beings,” Arrington said, to develop human character. The Japanese man believed that we could use the classics to attain world peace.

Suzuki summed up his philosophy in his book “Nurtured by Love”: “I just want to make good citizens. If a child hears good music from the day of his birth, and learns to play it himself, he develops sensitivity, discipline, and endurance. He gets a beautiful heart.”

Arrington recalled a story from the book in which Suzuki describes a teenager who played selfishly. His playing seemed to lack heart. So Suzuki gave the teen a homework assignment: to help his mom with housework and, in so doing, serve someone other than himself.

“It takes a beautiful soul to make real music,” Arrington said. “You can tell from the music if people are playing out of love.”

A World Based on Mutual Listening

Arrington sees classical music training as a chance for people “to connect across geographical and cultural divides.”

In recent decades, he pointed out, an effort has been made to use music to break through cultural barriers. In 2008, for example, PBS ran a show on the documentary by Mark Johnson, “A Cinematic Discovery of Street Musicians,” the filming of which started the movement and foundation Playing For Change, which brings musicians from different traditions together in the hope of transformative experiences.

Classical music in particular has often been used to encourage “young musicians to see the humanity in each other,” Arrington said.  And European classical music has been used for this purpose rather than classical Indian or Iranian music, for example, because despite these forms being much older, Europe’s music has had the farthest reach of any classical music form. Similarly, popular and folk music are often language- and culture-specific.

Playing for Peace summer music camp is one such program that has this very agenda, Arrington said. Founded in 1971, New Hampshire’s Apple Hill (which Arrington attended in the early ’90s) has become a center for music performance, education, and social change. Its Playing for Peace project is the Apple Hill String Quartet’s outreach program, which leads chamber music workshops in regions with a history of conflict, such as the Middle East.

It works by assigning musicians from conflicting communities to small ensembles. Arabs might rehearse with Israelis, and African-Americans with Caucasian-Americans.

“Each ensemble is coached in the skills of chamber music—listening, watching, adjusting, being sensitive and flexible—the same skills needed to work and function effectively in today’s contentious world. Participants learn to play music, communicate, and connect with each other in ways that may not be possible in their home communities,” the website states.

Once musicians learn tools for listening and communicating, they can change the world.

Musicians With a Mission

Arrington might be seen as a case study for using music for social betterment. As a high school student, he played violin in a health care facility for seriously ill patients. On one occasion, after he performed a classical piece, he heard a patient tell his wife the piece was beautiful. His wife hadn’t heard him say anything else that entire day.

That memory stayed with Arrington. Today, in addition to teaching children, Arrington works with the elderly. He founded the nonprofit Musicians With A Mission (MWAM) to bring “professional, personable, and service-minded musicians” into nursing and personal care homes.

Arrington saw that both musicians and the elderly spend a lot of time in isolation—the elderly due to a loss of physical, and hence, social abilities, and musicians due to the fact that rehearsal for many is often undertaken alone. His organization connects these two kinds of people.

The elderly, of course, benefit by hearing beautiful music. More importantly, MWAM’s website notes that music may be effective in the treatment of Parkinson’s Disease, Alzheimer’s, dementia, and depression.

Musicians benefit by having the chance to play for an audience—an appreciative one at that. They also benefit knowing that they are doing a kindness for others.

For Arrington, this project is a joyful sharing.

“Anything that you do, that you take a lot of pleasure in, there’s even more pleasure in getting others to experience the joy,” he said to Pop City online magazine.

“The real joy for me is getting even more people to do this … and knowing that the effect is multiplied.”