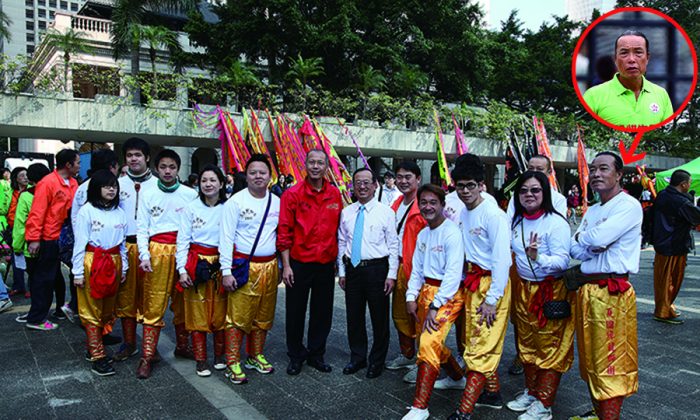 HONG KONG—Political struggles in China have intensified and spilled over into Hong Kong after the legislative “Two Sessions” of the Chinese Communist Party (CCP).

A recent scandal was exposed involving funds given to the Dragon and Lion Dance Extravaganza in Hong Kong, sources told the Epoch Times. CCP secretary Wang Qishan, who supports the Xi Jinping faction of the CCP, targeted this scandal in order to fight the Democratic Alliance for the Betterment and Progress of Hong Kong (DAB), which supports the Jiang Zemin faction.

The Hong Kong government created the Mega Events Fund (MEF) in 2009 to sponsor events staged by local non-profit organizations such as arts, sports and cultural groups. The government has given HK$250 million to MEF in order to add vibrancy to Hong Kong, enrich the travel experience for tourists, and reinforce Hong Kong’s position as the Events Capital of Asia.

However, former Democratic Party lawmaker Nelson Wong Sing-chi said that the democrats (the democrats includes the Democratic Party and all the pro-democracy camps such as the Civic Party, etc) strongly opposed the founding of MEF as it was believed to be a way for the DAB and other pro-establishment groups to make underhand deals.

Wong said that last year, for example, the MEF supplied HK$8 million to the Kitchee vs. Manchester United soccer game, but fewer than half of the 40,000 available tickets were offered to the public.

Wong also raised a number of doubts about the MEF-supported Dragon and Lion Dance Extravaganza, saying that they allegedly employed illegal mainland workers, used child labor, and falsified accounts. In addition, Wong suspects there is a conflict of interest because the event was monopolized by the two lion dance groups Ha Kwok-cheung and Tam Ting-pong, who have close ties with the DAB.

On April 16, the Audit Commission criticized the MEF for its chaotic management. The Dragon and Lion Dance Extravaganza was organized by DAB lawmaker Chan Kam-lam, and it was discovered that of the total HK$5 million granted to this event, at least HK$4 million went to the lion dance groups Ha Kwok-cheung and Tam Ting-pong.

There are no records of quotations, invoices, recruitment, or remuneration. The Audit Commission also found many accounts unclear, and the remaining sponsored money could not be traced.

All MEF Assessment Committee members are appointed by the Hong Kong government. The MEF has sponsored 24 projects with funds totaling nearly 100 million dollars.

According to an inside source, most of the people involved in the lion dances are related to triads. Triads were introduced into Hong Kong politics by former CCP vice president Zeng Qinghong, who supports the Jiang faction and has long held the portfolio for Hong Kong affairs.

Triad forces are utilized as a means of control, buying votes and threatening the democrats during Chief Executive and Legislative elections.

Where the Money Went

The DAB, founded in 1992, was unpopular and widely known to be a pro-CCP party. However, they won the most votes in Legislative and District Council elections by doing what they called “community work.”

That is, they bribed the elderly and grassroots voters with feasts, dumplings, moon cakes, and other treats. This requires a great deal of money.

According to an inside source, the DAB has big warehouses in Yuen Long in Hong Kong’s New Territories, which it uses to store rice, canned food, and other goods. These goods are purchased with money which the DAB raises and transfers to companies under DAB members. The companies buy the goods and later donate them in the companies’ names to DAB District Councilors or Party members running for election, to be used for their community work.

In the past, the pro-establishment camp has used food to please voters. Publicly, these resources are obtained through various companies, women’s organizations, or community groups in order to avoid suspicion of bribery and violation of election regulations.

The actual source of these funds was revealed at a DAB fundraising gala on April 15.

That night, the funds raised reached almost 70 million dollars, setting a new record. A calligraphy piece donated by Zhang Xiaoming, Director of the Liaison Office of the CCP, was sold for HK$13.8 million to mainland Chinese entrepreneur Xu Rongmao.

Xu is believed to be associated with the Jiang faction, according to Shanghai human rights lawyer Zheng Enchong.

The DAB has been backed financially by the Jiang faction and is expanding. Under the Jiang faction’s control, the DAB suppresses democratic views and supports the current Hong Kong Chief Executive chosen by the CCP.

It also goes all out to suppress the Falun Gong spiritual practice. In 2003, Article 23 aimed to silence Falun Gong and any other anti-CCP voices in Hong Kong.

The CCP fully supported this article, and so did DAB legislative councilors Yip Kwok-him and Chan Kam-lam. This was the same year as the District Council elections, and Yip lost the election for offending the public opinion by pushing Article 23.

The Hong Kong Youth Care Association (HKYCA) is a CCP-supporting group created to suppress Falun Gong. It is fostered by Leung Chun-ying and retired CCP official Zeng Qinghong, and its vice president Lam Kwok-on was also a former DAB member and CCP official.

Lam often slanders the pan-democratic camp and is believed to be closely associated with triads. He was a member of the campaign committee of DAB lawmaker Lau Kong-wah, and he also helped DAB member Yiu Ming run District Council Elections.

Inside sources reported that HKYCA president, Hung Wai-sing, also has close contact with the DAB.

The lion dance group of Leung Chun-ying’s supporter Chan Ka-fai was hired by the DAB.