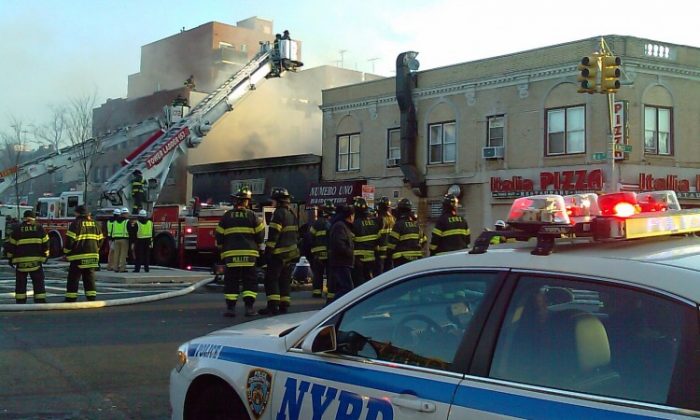 Brooklyn wedding and event planning business, the Dalmazio, located at 1716 W. Sixth St., in the Gravesend area, exploded into flames early Wednesday morning. Firefighters and police were on the scene quickly to put out the blaze, which is being treated as a suspicious fire. (Jing Zang/The Epoch Times)
US

The Dalmazio, a 35-year-old Italian wedding and event planning business, burst into flames around 4:15 a.m. Wednesday morning. The small, one-story commercial building located at 1716 W. Sixth St., in Gravesend, Brooklyn, was reduced to a shell after its roof collapsed.

The blaze was categorized a four-alarm fire, requiring the department to send most of its available equipment. Adjacent buildings suffered significant smoke and water damage, while some residents in nearby buildings were evacuated. At least one woman was treated for smoke inhalation at the scene.

The New York City Fire Department suspects possible foul play. FDNY Assistant Chief Ronald Spadafora told NY1, “Heavy on arrival the building was all locked up in the early morning hours. So these are all indicators of a possible incendiary fire.” The cause of the fire is still under investigation.