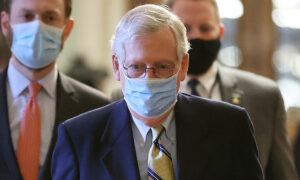 DALLAS— Authorities say multiple suspects using automatic weapons opened fire on officers outside Dallas Police headquarters, before one man fled the scene in what witnesses described as an armored van.

Dallas Police Chief David Brown says the shootout began about 12:30 a.m. Saturday, when the suspects pulled up to the building located south of downtown and began firing. He says at least one of the suspects fled the scene in a van that rammed a police cruiser before leading police on a chase that ended at parking lot in Hutchins.

Brown says negotiations with that suspect are ongoing. No injuries were reported.

Brown says as many as four suspects may have been involved, including some possibly located at elevated positions. Police also found four bags, including one holding a pipe bomb.