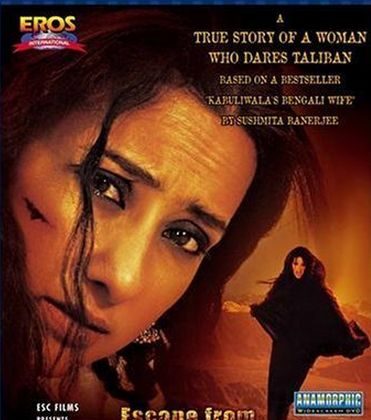 Sushmita Banerjee is played by Bollywood actress Manisha Koirala in the 2003 film "Escape From the Taliban." Banerjee was killed on Wednesday, Sept. 4, 2013, by the Taliban in Afghanistan, say local police. (Screenshot/IMDb.com)
Asia & Pacific

Sushmita Banerjee, 49, was shot at least 20 times with patches hair pulled out her head by Taliban gunmen on Wednesday night, police in Paktika province, Afghanistan, told the Telegraph and the BBC.

Banerjee’s murder comes after a recent move back to the country. She had written a book about the oppression she experienced under the Taliban, which was made into the Bollywood movie “Escape From the Taliban.”

Banerjee was played by one of India’s most prominent actresses, Manisha Koirala.

Banerjee grew up in India, but married an Afghan, Jaanbaz, who took her to his home in Afghanistan in 1989. A synopsis of the movie describes her journey: “On the way there, Sushmita is horrified to see mutilated corpses, bomb explosions, and armed militants.”

She suffered abuse and restricted freedom under Taliban rule. She tried to escape to Pakistan once, but was caught by her in-laws. They kept her prisoner in the house, she said, and when she tunneled her way out, she was caught and interrogated by the Taliban.

“Many of them said that since I had fled my husband’s home I should be executed. However, I was able to convince them that since I was an Indian I had every right to go back to my country,” she wrote in an article for Outlook magazine in 1998. She continued: “The interrogation continued through the night. The next morning I was taken to the Indian embassy from where I was given a safe passage. Back in Calcutta I was reunited with my husband. I don’t think he will ever be able to go back to his family.”

She had said life was tolerable in Afghanistan until the Taliban crackdown of 1993. Her husband had gone to Calcutta, India, for business and had not returned. Women were only able to leave the house accompanied by their husbands. She had run a business from home and was thus labeled an immoral woman.

The Taliban have not claimed responsibility for her death, though local officials told the BBC the Taliban went to her house, tied up her family, shot her, then dumped her body near a school.