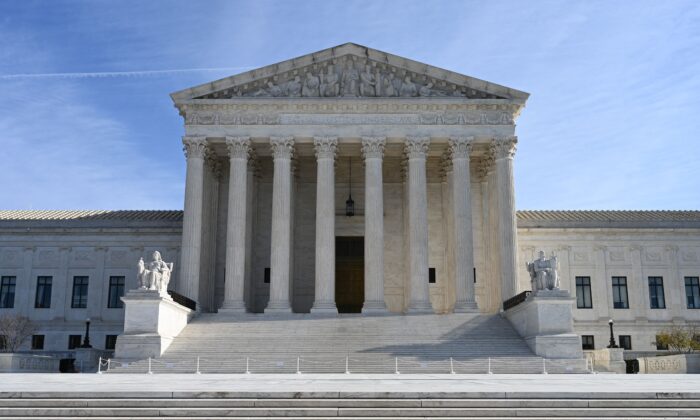 The U.S. Supreme Court in Washington on Dec. 4, 2022. (Daniel Slim/AFP via Getty Images)
By Samantha Flom

After a months-long investigation sparked by the May leak, the court released its much-anticipated investigative report (pdf) on the matter Thursday, finding that it was “not possible” to identify the person responsible for the breach or how the document had ended up in the hands of Politico.

“The Supreme Court’s report indicates that they cannot isolate the culprit among the over 80 possible suspects for the Dobbs leak,” Turley noted in a series of Jan. 19 tweets. “It is an admission that is almost as chilling as the leak itself.”

The Supreme Court’s report indicates that they cannot isolate the culprit among the over 80 possible suspects for the Dobbs leak. It is an admission that is almost as chilling as the leak itself…

Turley also posited that, despite the security recommendations of the court’s marshal, the inconclusive investigation would likely only serve to embolden future leakers.

“The nature of the Court’s work requires a free flow of drafts and memoranda,” he noted. “That is why we hope to achieve through deterrence what was not achieved through ethics.

“In this age of rage, this danger will only grow,” he added. “Someone felt that they had license to leak. Some others may now feel that they have the impunity to do so.”

While, in general, Supreme Court leaks are rare, the Dobbs leak was made all the more significant by the implications of the ruling on nearly a half-century of abortion law in the United States.

Politico, having exclusively obtained an early draft of the opinion, published it May 2 as part of a report titled, “Supreme Court has voted to overturn abortion rights, draft opinion shows.”

Although the draft differed slightly from the final opinion the court would issue on June 24, the decision was the same: The court ruled 5–4 that there is no constitutional right to abortion, striking down the precedents set by the 1973 landmark abortion case of Roe v. Wade and the subsequent 1992 ruling in Planned Parenthood v. Casey.

The leaked draft sparked national protests, including outside the homes of conservative justices, with Justice Brett Kavanaugh becoming the target of an assassination attempt.

Calling the leak an “egregious breach” of the court’s trust, Chief Justice John Roberts ordered an investigation into its source.

“To the extent this betrayal of the confidences of the Court was intended to undermine the integrity of our operations, it will not succeed,” Roberts assured in a May 3 statement. “The work of the Court will not be affected in any way.”

Prior to Thursday’s report, the court had been tight-lipped on the progress of its investigation, with the only updates coming from anonymous sources.

But after conducting 126 formal interviews of 97 employees, the team was unable to identify the individual responsible for the leak.

“No one confessed to publicly disclosing the document and none of the available forensic and other evidence provided a basis for identifying any individual as the source of the document,” Curley noted.

While the possibility of a hack could not be entirely ruled out, the team found that the evidence did not suggest improper outside access.

Investigators were likewise unable to rule out inadvertent or negligent disclosure, “for example, by being left in a public space either inside or outside the building.”

Additionally, despite reports that the justices were not interviewed as part of the investigation, Curley clarified in a statement Friday that she did speak with them in addition to their staff.

“During the course of the investigation, I spoke with each of the Justices, several on multiple occasions,” she said. “The Justices actively cooperated in this iterative process, asking questions and answering mine. I followed up on all credible leads, none of which implicated the Justices or their spouses. On this basis, I did not believe that it was necessary to ask the Justices to sign sworn affidavits.”

While also noting in her report that investigators were still reviewing and processing some electronic data and that a few inquiries were pending, Curley proposed several security improvements to prevent future breaches, including enhanced training, tracking mechanisms to monitor the printing and copying of documents, and policy updates on the handling of draft opinions and who can access sensitive information.

In a statement attached to the report, the court offered Curley their “full support” as she and her team continue their investigation.