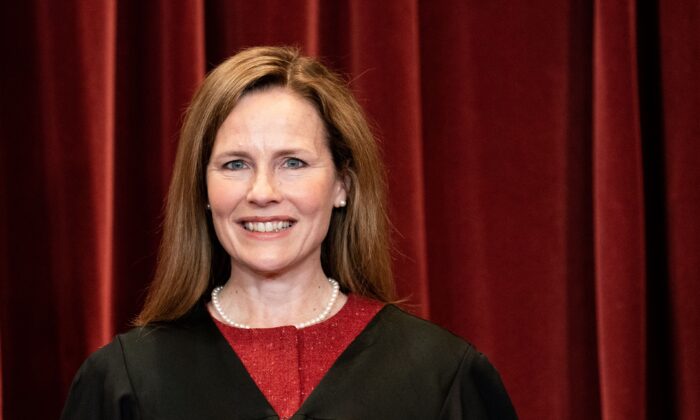 Associate Justice Amy Coney Barrett stands during a group photo of the Justices at the Supreme Court in Washington on April 23, 2021. (Erin Schaff/POOL/AFP via Getty Images)
By Jack Phillips

Barrett did not refer the case to the full Supreme Court, acting alone in refusing to take up the case. She denied the application without any explanation.

Barrett, who handles emergency matters from several Midwest states, denied an emergency request by two Indiana residents (pdf), represented by a conservative legal group, to bar the U.S. Department of Education from implementing the Democratic president’s plan to forgive debt held by qualified people who had taken loans to pay for college.

Biden’s plan, unveiled in August, was designed to forgive up to $10,000 in student loan debt for borrowers making less than $125,000 per year, or $250,000 for married couples. Borrowers who received Pell Grants to benefit lower-income college students would have up to $20,000 of their debt canceled.

Two weeks ago, Barrett declined a similar request from a taxpayer group in Wisconsin to temporarily block the administration from implementing the debt program.

The plaintiffs had argued that the Department of Education “not only exceeded its authority … but has also violated constitutional limits.”

“They thus have no legitimate interest in avoiding an injunction,” they said. “Huge numbers of borrowers face the immediate possibility of unwanted, and unlawful, tax liability through automatic cancellation, while every American will foot the half-trillion-dollar bill for [the Department of Education’s] improper actions.

On Thursday, the White House issued a statement saying that some 26 million Americans have applied for loan forgiveness since it was unveiled. Some 16 million of those have already been approved, the statement said.

In what appears to be campaign messaging ahead of the midterms, the administration also claimed that “if Republican officials get their way, tens of millions of Americans’ monthly costs will rise dramatically when student loan payments resume next year.”

Republicans, meanwhile, have been critical of the program, saying that it would place undue burden on taxpayers. They’ve also questioned the timing of the debt program, which was unveiled with just weeks to go before the Nov. 8 midterms.

Since Biden announced the plan in August, it has faced at least six lawsuits. For now, the student loan forgiveness portion of the plan was placed on hold from a challenge brought by six Republican-led states several weeks ago.

A federal appeals court in late October temporarily blocked the Biden plan, granting a request from the six Republican-led states. They are Nebraska, Missouri, Arkansas, Iowa, Kansas, and South Carolina.

Those states argued that the debt relief program bypassed Congress’s authority and posed a threat to state tax revenues along with funds earned by state entities that invest in or service student loans. The St. Louis-based U.S. 8th Circuit Court of Appeals ordered an expedited briefing schedule on the case.