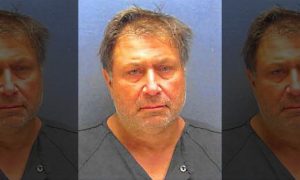 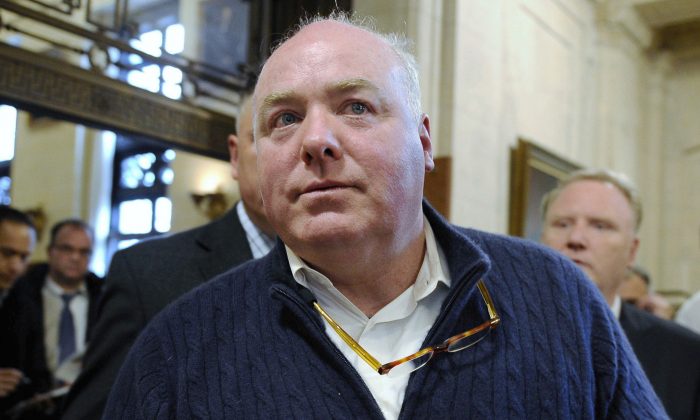 In this Feb. 24, 2016, file photo, Michael Skakel leaves the state Supreme Court after his hearing in Hartford, Conn. The Supreme Court is leaving in place a decision that vacated a murder conviction against Kennedy cousin Michael Skakel. The high court on Monday declined a request from the state of Connecticut to hear the case. (AP Photo/Jessica Hill, File)
US News

The country’s highest court announced that it would not hear an appeal against Kennedy cousin Michael Skakel, leaving state prosecutors with a choice of retrying the case or letting him remain free without a conviction.

Skakel, 43, was sentenced to 20 years in prison in 2002 for murdering Martha Moxley in 1975, who lived across the street from the Skakel family in Greenwich, Connecticut.

Her body was found in her family’s backyard, and an autopsy showed she had been bludgeoned to death with a golf club that was traced back to Skakel’s home. Skakel and Moxley were both 15 at the time of her death.

The Supreme Court on Jan. 7 denied the request by the state of Connecticut to hear the case without giving a reason—a usual practice of the court. This means the decision by Connecticut’s highest court to throw out Skakel’s conviction will stand.

A Connecticut judge granted the 43-year-old a new trial in 2013 after Skakel claimed that his lead trial lawyer, Michael Sherman, did an inadequate job representing him, including by failing to contact an additional witness who could confirm his alibi at the time of the killing.

He was subsequently released on a $1.2 million bail after already serving 11 years in prison. The state’s Supreme Court then reinstated his murder conviction in 2016, rejecting the lower court’s ruling that Skakel’s trial lawyer didn’t adequately represent him. Then in 2018, the state’s high court made an unusual move by overturning its 2016 decision.

The State Of Connecticut Division Of Criminal Justice said in an emailed statement that they “appreciate the Supreme Court’s consideration of the State’s petition” but declined to make further comments until Moxley’s family had been informed.

“We extend our condolences to Mrs. Moxley and her family on their tragic loss,” the statement said.

Moxley’s 86-year-old mother, Dorthy Moxley, said she was disappointed with the Supreme Court’s decision. She said she has no doubt that Skakel killed her daughter and she wants to see him back in prison but will support any decision Connecticut prosecutors make about whether to retry him.

“The state of Connecticut had a very, very, very good case, and we absolutely know who killed Martha,” she said. “If Michael Skakel came from a poor family, this would have been over. But because he comes from a family of means they’ve stretched this out all these years.”

Skakel’s appellate lawyer, Roman Martinez, told NBC News that they hope the State of Connecticut will give Michael the chance to move forward with putting his life back together.

“Over the past 10 years, two Connecticut courts—including the Connecticut Supreme Court—have painstakingly reviewed every detail of Michael Skakel’s case. Both reached the same conclusion: Michael’s conviction violated the US Constitution. It was the result of a deeply unfair trial,” he said in the statement.

“The evidence shows that Michael spent 11 years in prison for a crime he did not commit.”

Skakel is a nephew of Robert F. Kennedy’s widow, Ethel Kennedy. The case has drawn international attention because of the Kennedy name, Skakel’s wealthy family, numerous theories about who killed Moxley, and the brutal way in which she died. Several other people, including Skakel’s brother Tommy Skakel, have been mentioned as possible killers.