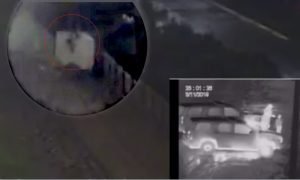 Supreme Court Sides With Trump on Detention of Criminal Aliens

The Supreme Court affirmed the federal government’s authority to detain illegal aliens with criminal records at any time after they have completed their prison terms, handing a victory to immigration authorities and the administration of President Donald Trump.

The court ruled 5–4 that federal authorities could apprehend and detain aliens with criminal records at any time, not only immediately after their release from prison.

Under federal immigration law, aliens convicted of certain offenses are subject to mandatory and indefinite detention during their deportation process.

Challengers seized on a provision in the law which stated that the government can detain convicted aliens “when the alien is released” from criminal detention. The challengers argued that the language limits the time of legal detention to a 24-hour window immediately after aliens are released. The Trump administration argued the government should have the power to detain such aliens anytime.

The top court’s decision is significant because dozens of so-called “sanctuary cities” around the nation have passed laws instructing local law enforcement officers against cooperating with federal immigration authorities. As a result, immigration officers face mounting obstacles to detaining convicted aliens when they complete their prison terms.

The ruling, authored by conservative Justice Samuel Alito, stated that it isn’t the court’s job to impose a time limit for when aliens can be detained after serving a prison sentence. Alito noted that the court has said in the past that “an official’s crucial duties are better carried out late than never.”

Alito said the challengers’ assertion that aliens had to be detained within 24 hours of ending a prison sentence is “especially hard to swallow.”

The March 19 decision follows a February 2018 ruling in a similar case in which the court curbed the ability of aliens held in long-term detention during deportation proceedings to argue for release.

In both of the detention cases, the Supreme Court reversed the San Francisco-based 9th Circuit Court of Appeals, a leftist court that Trump has frequently criticized. In each case, litigation against the federal government started before Trump took office.

In the latest case, the administration had appealed a 2016 9th Circuit ruling that favored immigrants, a decision it said would undermine the government’s ability to deport immigrants who have committed crimes.

In the most significant immigration-related case recently before the court, the conservative justices were also in the majority in June 2018 when they upheld a 5–4 vote on Trump’s travel ban that targeted terrorism-prone countries.

In April 2018, the court issued a ruling that could hinder the administration’s ability to step up the removal of aliens with criminal records, invalidating a provision in another law, the Immigration and Nationality Act.