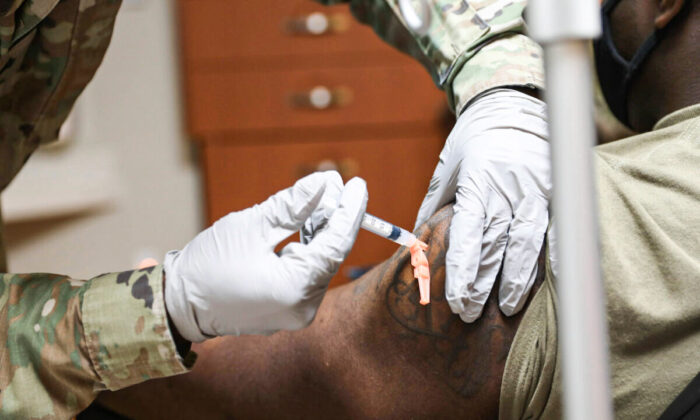 The U.S. Supreme Court ruled in favor of the Pentagon on March 25, temporarily granting the department’s request to let U.S. Navy commanders consider COVID-19 vaccination status when deciding whether to deploy Navy SEALs or other Navy Special Warfare personnel.

The 6–3 ruling overturns a district court order in January, and is in place until ongoing litigation is resolved in other lower courts.

Justice Brett Kavanaugh, who was appointed by former President Donald Trump, wrote in a concurring opinion (pdf), “In this case, the District Court, while no doubt well-intentioned, in effect inserted itself into the Navy’s chain of command, overriding military commanders’ professional military judgments.”

His statement parallels an argument the Biden administration made to the Supreme Court in early March (pdf), which reads, in part: “By requiring the Navy to deploy and assign respondents without regard for their vaccination status, the district court effectively inserted itself into the Navy’s chain of command.”

Kavanaugh also wrote that the Religious Freedom Restoration Act “does not justify judicial intrusion into military affairs in this case.” He said: “That is because the Navy has an extraordinarily compelling interest in maintaining strategic and operational control over the assignment and deployment of all Special Warfare personnel—including control over decisions about military readiness. And no less restrictive means would satisfy that interest in this context.”

Alito, who was appointed by former President George W. Bush, called the ruling a “great injustice” in a dissenting opinion.

“But the Navy’s summary rejection of respondents’ requests for religious exemptions was by no means the least restrictive means of furthering those interests.”

Alito also said he dissented due to the language of the Biden administration’s application to the Supreme Court and the high court’s order, which he said “allows the Navy to use respondents’ unvaccinated status as a reason for directing them to perform whatever duties or functions the Navy wants, including sitting alone in a room pushing paper or reading manuals for the duration of the appellate process.”

He said the Biden administration has not shown “a compelling interest” in obtaining the level of relief it sought from the Supreme Court.

“I would not rubberstamp the Government’s proposed language,” he wrote. “While I am not sure that the Navy is entitled to any relief at this stage, I am also wary, as was the District Court, about judicial interference with sensitive military decision making.”

The ruling comes amid a legal challenge to the Pentagon’s COVID-19 vaccine mandate, brought by a group of unvaccinated 35 Navy Special Warfare service members—among them 26 Navy SEALs—who sought religious exemptions to the mandate.

Mike Berry, general counsel for First Liberty Institute, the nonprofit law firm that filed the suit on behalf of the Navy Special Warfare service members, said in a statement to Fox News: “The Court’s narrow partial stay will not deter our mission to ensure America’s service members do not lose their religious freedom. As Justice Alito said, this is a ‘great injustice.’”

Back and Forth Legal Battle

In the lawsuit filed in 2021, the Navy service members argued that the Biden administration’s religious exemption process was a sham because none had been granted. They also said they had a right to a religious exemption under the Religious Freedom Restoration Act.

A federal judge in January said the group had a right to refuse the vaccine based on their religious beliefs and granted them a preliminary injunction that barred the Pentagon from taking any action against them—such as disciplining or discharging them—for refusing the vaccine, while litigation plays out.

“Our nation asks the men and women in our military to serve, suffer, and sacrifice. But we do not ask them to lay aside their citizenry and give up the very rights they have sworn to protect,” U.S. District Judge Reed O’Connor, a George W. Bush nominee, wrote in his order (pdf).

They argued that “forcing the Navy to deploy plaintiffs while they are unvaccinated threatens the success of critical missions and needlessly endangers the health and safety of other service members.”

The Biden administration didn’t seek to block the other aspect of the federal judge’s ruling that barred the Pentagon from taking actions against the service members for refusing the vaccine.

The New Orleans-based appeals court on Feb. 28 denied the request (pdf). The three-member panel said the defendants hadn’t proven “paramount interests” that justify vaccinating the plaintiffs “in violation of their religious beliefs.”

The Biden administration later filed an emergency application in early March, asking the U.S. Supreme Court to intervene in the case, so that the Pentagon can potentially avoid deploying COVID-19 unvaccinated service members.

“Forbidding the Navy from considering respondents’ unvaccinated status in making deployment decisions or other assignments will jeopardize the success of any missions to which they are assigned,” Elizabeth Prelogar, solicitor general, said in the application (pdf).