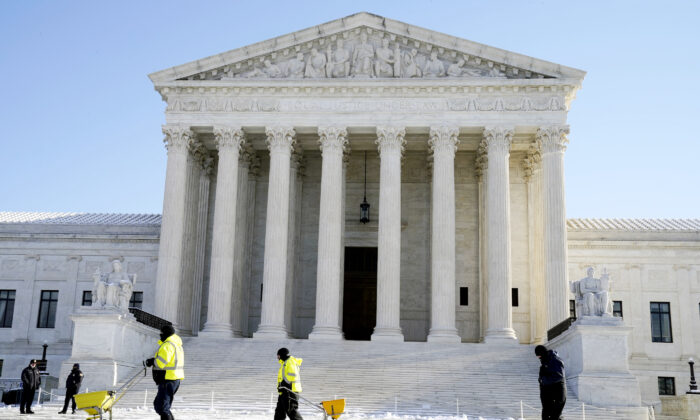 The Supreme Court appears to be skeptical of the Biden administration’s bold claim that it has the authority to impose vaccination mandates applying to more than 84 million private-sector employees and to workers in federally funded health care facilities.

In a rare Friday sitting on Jan. 7, the high court seemed broadly receptive to the idea that states have the authority to impose vaccination mandates, but questioned the ability of federal agencies to do the same.

The court decided on Dec. 22, 2021, to fast-track emergency applications pertaining to challenges to the lawfulness of the two mandates as those challenges work their way through the lower courts. Various business groups, along with Ohio, Missouri, Louisiana, and two dozen other states, want the federal mandates to be blocked by the courts.

The private sector worker mandate, which imposes penalties on employers of up to $14,000 per violation, isn’t currently stayed by any court, while the health care worker mandate has been frozen by lower courts.

The first case, National Federation of Independent Business (NFIB) v. Department of Labor, concerns the Biden administration’s attempt through the Occupational Safety and Health Administration (OSHA) to force employers with at least 100 employees—which applies to most of the nation’s private workforce—to submit to vaccinations aimed at preventing COVID-19 or to regular testing in order to detect the virus.

Unless paused, the mandate begins taking effect on Jan. 10, NFIB stated in a brief.

In the second case, Biden v. Missouri, the federal government seeks to lift lower court stays that are blocking it from enforcing a Nov. 4, 2021, emergency regulation by the Department of Health and Human Services (HHS) requiring the COVID-19 vaccination for more than 10 million employees at health care facilities that participate in the Medicare and Medicaid programs.

During oral arguments on the private-sector mandate, Chief Justice John Roberts said the federal government may be overreaching. The executive branch is attempting to “cover the waterfront” by imposing COVID-19 policies on the population at large instead of leaving the matter to Congress, according to Roberts.

“This has been referred to … as a work-around,” he said. “This is something that the federal government has never done before, right, mandated vaccine coverage?”

U.S. Solicitor General Elizabeth Prelogar said, “It’s true that there has been no standard that looks exactly like this one.”

“If there is an ambiguity, why isn’t this a major question that, therefore, belongs to the people’s representatives of the states and in the halls of Congress?” Gorsuch asked

He noted that the Occupational Safety and Health Act that created OSHA is “50 years old” and “doesn’t address this question.”

“[OSHA’s] economy-wide, one-size-fits-all mandate covering 84 million Americans is not a necessary, indispensable use of OSHA’s extraordinary emergency power, which this court has recognized is narrowly circumscribed,” NFIB attorney Scott A. Keller said.

Keller noted that “just three days ago,” the U.S. Postal Service told OSHA that the mandate requirements “are so burdensome for employers that the federal government is now seeking an exemption from its own mandate for the Postal Service.”

“That’s because OSHA’s economy-wide mandate would cause permanent worker displacement rippling through our national economy, which is already experiencing labor shortages and fragile supply lines. OSHA has never before mandated vaccines or widespread testing, much less across all industries,” he said.

“Why isn’t this necessary to abate a grave risk?” Kagan asked Keller. “This is a pandemic in which nearly a million people have died.

Keller said he didn’t contest “that COVID is a grave danger … but the agency has to consider and explain alternatives.” OSHA, instead, “jumped immediately to a vaccine-or-testing mandate.”

“OSHA typically identifies a workplace danger, and then regulates it,” Flowers said.

“But here, the president decided to regulate a danger and then told OSHA to find a work-related basis for doing so” and created “a blunderbuss rule, nationwide in scope, that requires the same thing of all covered employers, regardless of the other steps they’ve taken to protect employees, regardless of the nature of their workplaces, regardless of their employees’ risk factors, and regardless of local conditions that state and local officials are far better positioned to understand and accommodate.”

Kagan faulted the description of the mandate as “a blunderbuss approach when everybody knows from living their normal lives that every workplace has been affected by this, save for … a few here and there.”

Justice Stephen Breyer, who’s 83 and under pressure from the left to retire in order to give President Joe Biden the chance to replace him with another, younger liberal justice, said there were “750 million new cases yesterday or close to that.”

“That’s why I said I would find it … unbelievable that it could be in the public interest to suddenly stop these vaccinations,” Breyer said.

According to the U.S. Census Bureau, the current total U.S. population is only 332.4 million.

In the second hearing, dealing with the health care worker mandate, Principal Deputy U.S. Solicitor General Brian Fletcher said the preliminary injunctions blocking the mandate need to be lifted because they “are delaying that urgently needed protection for Medicaid and Medicare patients in half the country.”

“Hospitals, nursing homes, and other Medicare and Medicaid providers serve patients who are especially vulnerable to COVID-19 in settings that are especially conducive to the spread of the virus,” he said.

HHS Secretary Xavier Becerra instituted the vaccination mandate because he found that it’s “the best way to prevent workers from infecting their patients with a potentially deadly disease,” Fletcher said.

“He also found that any delay in implementing that requirement would cause preventable deaths and severe illnesses.”

Congress gave the power to make “quintessential predictive and policy judgments to the secretary, and the states have identified no basis to disturb his conclusions.”

“These same workers are now forced to choose between losing their jobs and complying with the government’s vaccine mandate,” Osete said.

Becerra’s claim of the authority “to impose this mandate is expansive, unprecedented, and unlawful.”

Louisiana Solicitor General Elizabeth Murrill said the mandate, which would “force millions of people working for or with a Medicare or Medicaid provider to undergo an invasive, irrevocable forced medical treatment” is “a bureaucratic power move that is unprecedented.”

Roberts asked Murrill if she agreed with the federal district court which stated in the case that “COVID no longer poses the dire emergency it once did”?

“I think that … those are shifting sands. Obviously, COVID conditions can change at any given time. And they have,” Murrill said.